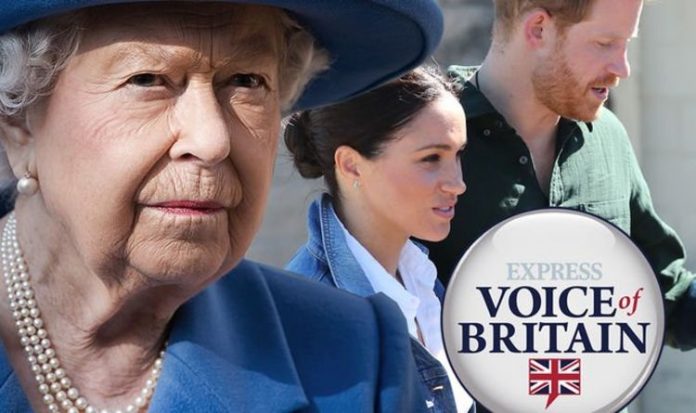 Earlier this year, the Duke and Duchess of Sussex shocked the world by announcing they were stepping down as senior members of the Royal Family. The couple are now living in Los Angeles.

The Queen reluctantly agreed to her grandson’s wish for a more independent future away from the Firm.

A later deal brokered by the 94-year-old monarch meant the royal couple went on their own way from April.

During showdown talks, dubbed the ‘Sandringham Summit’, with the Queen, her heir Charles and Prince William, Harry and Meghan agreed to abide by a number of rules to embark on their new life, which are set to reviewed in the new year.

With the review fast approaching, it is unclear how the couple will proceed and whether or not they will ask the Queen to rejoin the Royal Family.

An Express.co.uk poll – which ran from 11am to 6pm today – asked: “Would you support Meghan and Harry rejoining the royal frontline?”

A staggering 11,950 people responded with 92 percent (10,955) voting against the couple returning to the royal frontline.

Responding to the poll in the comments section, one reader said: “No. They have burned any bridge back.

“The mere fact they are Royal Family members is beyond belief knowing the whole world has been privy to every comment and book signing makes our country a laugh stock.

A third person added: “Absolutely not!

“They have caused enough trouble already and if allowed back they will cause even more.

“Better make a clean break and go forward without them.”

While a fourth reader simply said: “It’s ridiculous to even consider it. No way.”

Someone else said: “They have burned their bridges and dumped on the British people so why should these offensive woke pair ever be allowed to represent this nation again?”

As part of the January agreement, the Duke and Duchess of Sussex sought to carve out “a progressive new role”, with the aim to finance themselves.

The pair also stopped using their HRH titles – His or Her Royal Highness – were banned from using “royal” in their branding and Harry, who remains a prince, was forced to relinquish his beloved military titles.

As a result, the couple could no longer use their Sussex Royal handle on Instagram nor update their SussexRoyal.com website.

The Sussex Royal Foundation, which they were setting up, was also wound up.