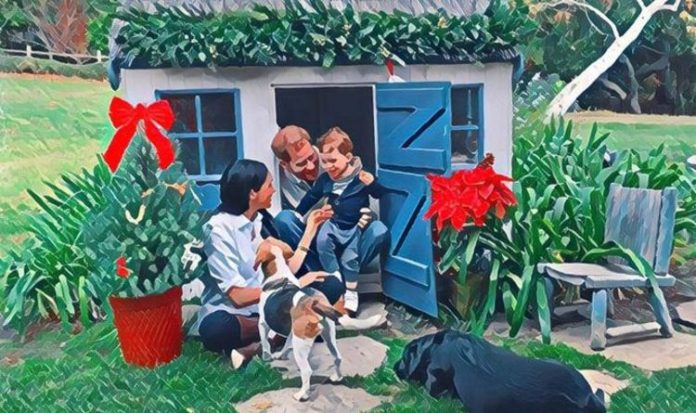 Meghan Markle and Prince Harry may have been “trolling the media” with the release of their California Christmas card, royal commentators have claimed. The family picture of the couple, their son Archie and their two dogs was released via animal charity and London-based shelter, The Mayhew, which is one of the Duchess of Sussex’s patronages. HeirPod hosts Omid Scobie and Maggie Rulli broke down the “cheeky” details of the picture.

Mr Scobie told listeners: “What was fun about this was that I almost felt that they were trolling the media a little bit.

“They added in this very artistic filter that kind of kept some of the details at bay.”

Ms Rulli agreed: “I thought the same exact thing, you make such a good point.

“When I first saw it, I thought wow, what a kind of intimate photo they’re sharing.”

She continued: “It’s unlike them to give us a glimpse not only of them as this family, but the dogs and their son.

“Also the backyard and their new home. It felt so intimate.

“But then you looked closer and saw that it was kind of an artistic take on that intimate moment.

“I did think oh that’s a cheeky little move they did there.”

Ms Rulli told listeners: “Secondly, the thing that caught my eye right away was the two dogs.

“I don’t think I’ve really ever seen the whole family, all five of them, together before.

“So I was very excited that the two pups made it on.

“It does make sense since it was Mayhew that sent it out.

“It’s very important and I loved the dogs in the photo.”