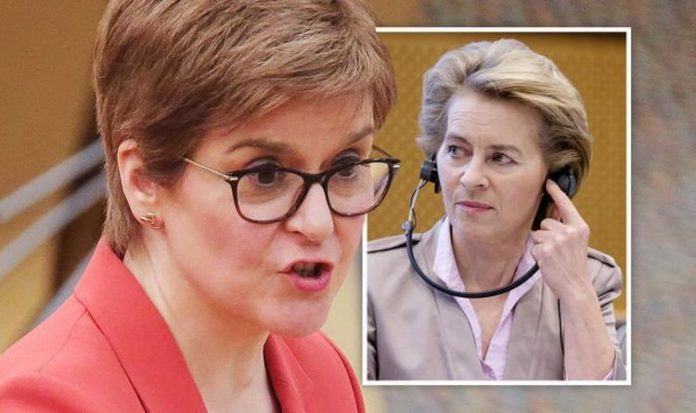 The SNP have used their growing momentum in recent years to convince the EU that Scotland should have a seat at the bloc’s table. European Commission President Ursula von der Leyen is a self-confessed “fan” of First Minister Nicola Sturgeon. On top of this, Belgian MEP Philippe Lamberts told Express.co.uk earlier this month that Ms Sturgeon could one day take the top job in Brussels. He said: “Nicola Sturgeon comes across as a genuine person, politically astute and someone whose word can be trusted. I can imagine her being President of the European Commission.”

Ms Sturgeon said this week on Twitter: “Tory/Labour view is that all Scotland can aspire to is a ‘choice’ between a terrible deal we didn’t vote for and ‘no deal’ we didn’t vote for, and even then our view only counts if it accords with Westminster’s.

“No thanks. Time to build a future based on what Scotland votes for.”

For the UK-EU trade deal to be ratified, it must pass through Parliament before the deadline for the transition period ends on January 1.

This means that the deal being voted down on Wednesday could lead to a no deal Brexit – something Ms Sturgeon has been a vocal opponent of.

A no deal Brexit would have a negative economic impact on the UK and the EU, meaning the SNP’s manoeuvre could anger both sides of the English Channel.

He said: “It’s rare for something to be both comical and deeply tedious, but how else to describe the Scottish National Party’s contortions as it tries to justify voting against the Brexit deal after spending years alleging that a no deal outcome was the worst possible?”

The SNP’s leader in Westminster – Ian Blackford – denied that his party is throwing its weight behind no deal by attempting to thwart the ratification of Mr Johnson’s treaty.

The SNP’s relationship with the bloc has changed over time.

In 2014, former European Commission President Jose Manuel Barroso said it would be “impossible” for Scotland to join the EU, but since then the tone has changed.

And today, the mood music between Edinburgh and Brussels appears to be far more friendly.