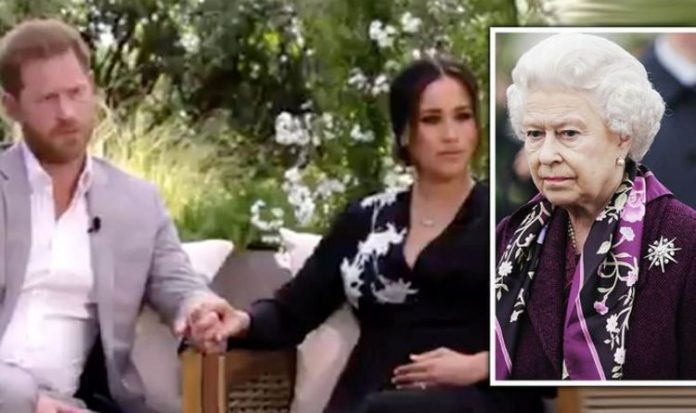 In the run-up to the much-anticipated interview with Meghan and Prince Harry sitting down with Oprah Winfrey, US broadcaster CBS has released two 30-second clips. One of these trailers shows the journalist asking the Duchess of Sussex whether she had been “silent or silenced”, before cutting to another part of the interview where Oprah tells Meghan: “Almost unsurvivable sounds like there was a breaking point.”

The ads also show Prince Harry speaking about his mother Princess Diana while holding hands with his wife.

These teasers, accompanied by tense music and dramatic cut scenes, have been criticised by royal commentator Robert Jobson, who wrote on Twitter: “The latest promo for the Meghan and Harry 7 March CBS interview with ⁦Oprah⁩ in which Meghan is asked was she ‘silent or silenced’ and she stays silent, is all for conspiratorial and dramatic.

“Makes the Royal Family sound like the Mafia. Bit daft and totally OTT [over the top].”

Meghan and Prince Harry have recorded their first joint post-Megxit interview with Oprah.

Meghan Markle and Prince Harry’s interview with Oprah will be broadcasted on Sunday (Image: GETTY)

Meghan Markle during her interview with Oprah Winfrey (Image: CBS)

As revealed by CBS itself last month, the Duchess spoke first alone with Oprah, before being joined by her husband.

In one of the teasers, Oprah confirms nothing has been considered off-limit in the interview, as previously announced by her colleague and friend Gayle King.

Among the topics, CBS said Oprah would quiz the royal about Meghan’s arrival in the Royal Family, how she has coped with the relentless attention from the media and the public, motherhood and Megxit.

Oprah is also said to have asked the couple about their hopes and plans for the future, now that they are no longer full-time working royals based in the UK.

The interview is set to air just a few hours after the Royal Family will virtually gather to celebrate Commonwealth Day in a BBC One special at 5pm GMT.

Oprah Winfrey revealed no topic has been considered off limits during the interview (Image: CBS)

Meghan Markle is pregnant with her second child (Image: CBS)

During this programme, the Queen will deliver a speech, while other senior royals including the Cambridges and the Wessexes will reflect on Commonwealth Day.

Meghan and Harry’s interview will also air one week after the Duke of Sussex first appeared on TV since stepping down as working royal.

Appearing on The Late Late Show with James Corden, Prince Harry joked about how his grandfather Prince Philip ends video calls and the much-appreciated present the Queen sent to Archie for Christmas.

However, Prince Harry also spoke about his future in California after Megxit.

Asked by Mr Corden what he expects life to be like now that he has relocated to California and what he is excited for it to be after Megxit once lockdown is over, he answered: “I have no idea, a slightly different version but a continuation of what we were doing back in the UK anyway.

Prince Harry also said he never wanted to walk away from the Royal Family and said “it was stepping back rather than stepping down”.

Explaining why he chose to leave the UK, Harry said the media fascination in his family had created a “difficult environment” and was damaging his mental health.

He said he needed to get “my family out of here”, before adding: “But we never walked away”.

He added: “As far as I am concerned, whatever decisions are made on that side, I will never walk away, I will always be contributing.