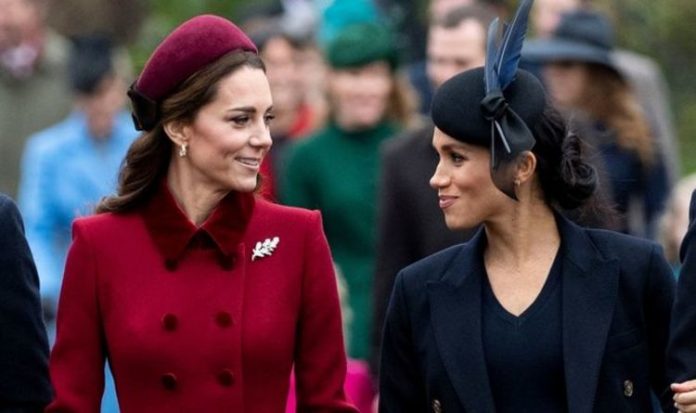 Prince Harry, Meghan Markle, Prince William and Kate Middleton have all been invited by Posh Spice to her son’s wedding. Brooklyn Beckham announced his engagement to the US actress Nicola Peltz in July.

Victoria Beckham has reportedly become close to the Duchess of Sussex this year following her and Prince Harry’s decision to step down as senior royals.

Ms Beckham and her football star husband David are friends with both the Sussexes and the Cambridges.

But royal observers have noted that the two royal couples barely spoke to each other during their last public appearance together at the Commonwealth Day service in March.

A source told The Mirror: “Vic’s been helping Meghan with her move to LA and Meghan has helped promote Victoria’s fashion line.

“But Vic’s been worried about inviting Meghan and Harry alongside Kate and William to the wedding.

“She is not only worried about how they all might feel about being thrust together but also at how the attention will no doubt be diverted off Brooklyn and Nicola.”

The source added: “David urged Vic not to stress about it and has insisted the royals will all know how to handle the situation.”

Brooklyn, 21, and his fiancée have postponed their wedding to 2022 due to the coronavirus pandemic.

READ MORE: Meghan Markle hints at future plans as she promises to ‘use her voice’

Ms Seward said she believes the only an “awful tragedy” would be enough to mend the brothers’ relationship.

She added that Prince Harry’s decision to step down as a senior royal has “baffled” his grandfather Prince Philip.

She said the Duke of Edinburgh had welcomed Meghan Markle with open arms after being a royal outsider himself.

Ms Seward told the podcast: “I rather doubt that they will ever get back to how they used to be. I really don’t think so. I think that’s probably a broken relationship.

“I think perhaps if something happened to Catherine or Meghan, the boys would be together again.

She added: “If there was an awful tragedy it would bring them together, but otherwise I don’t think that relationship will be mended.

“But that is a really personal point of view and I might not be right.”

The Sussexes stepped down as senior members of the Royal Family earlier this year.

Since March, they have been living in the US with their baby son Archie.