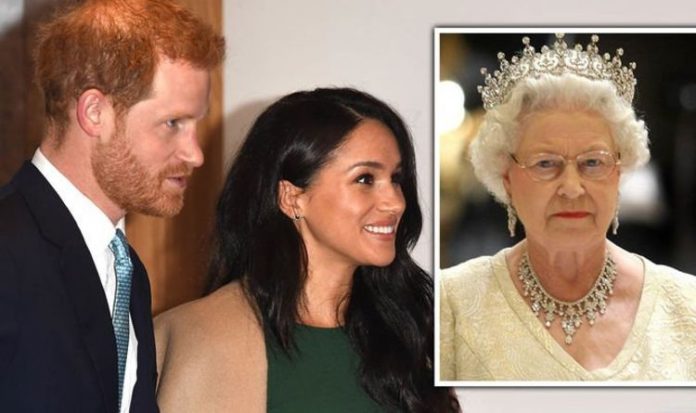 Meghan and Prince Harry have been accused of being “self-serving” and choosing the political and commercial arena shunned by the Royal Family. Royal biographer Hugo Vickers highlighted what he sees as the main differences between senior royals and the new Crown’s branch in the US.

In a letter to The Times, Mr Vickers wrote: “The Queen has many demands on her time and can call on her family for support.

“The most successful members of the Royal Family are those who quietly support her rather than attempt to compete with her.

“It is a considerable shame that the Sussexes were not prepared to work within this system.

“They could have achieved so much.

“They had the whole of the Commonwealth to work for and both appeared committed to this.

“Instead, they headed into a political and commercial arena, which is contrary to everything the Royal Family stands for.

“The Sussexes are self-serving: the working Royal Family the opposite.

“In the past year the Royal Family has indeed boosted our morale in many ways, rather different from lying barefoot in the park in California.”

Mr Vickers’s letter came as a response to an opinion piece by author Libby Purves, who believes royal duties, which require loyalty to the Crown and political neutrality, aren’t the same thing as charity work.

She wrote: “Royal service is not the same as celebrity virtue or billionaire philanthropy.

“That the Queen’s grandson can’t see that is surprising.

“That his American duchess and advisers don’t is less so, because it is bafflingly British.

“But it works, and those who do it dutifully deserve respect.”

Following Meghan and Prince Harry’s decision not to return as senior royals one year after they officially stepped down from their full-time working roles within the Firm, the Queen announced her decision to strip them of all their royal and military patronages.

In a statement, Buckingham Palace explained the monarch thinks that “in stepping away from the work of The Royal Family it is not possible to continue with the responsibilities and duties that come with a life of public service.”

But this take on duty and service doesn’t seem to be shared by Meghan and Harry who, minutes after Buckingham Palace made this announcement on Friday, issued their own statement.

It read: “As evidenced by their work over the past year, The Duke and Duchess of Sussex remain committed to their duty and service to the UK and around the world, and have offered their continued support to the organisations they have represented regardless of official role.

Over the past year, Meghan and Prince Harry established their new lives in California, where they bought a home and launched their new foundation Archewell.

Meghan and Harry have remained in touch with their patronages across the pond but have also tied links with other organisations based in the US which work with veterans, children and people in need.

They also struck deals with Netflix and Spotify, which will see them become TV and audio producers.

Yesterday, they also made a brief appearance in Spotify’s Stream On event, which teased users of the platform over the products to be launched this year – including the Archewell Audio podcast.