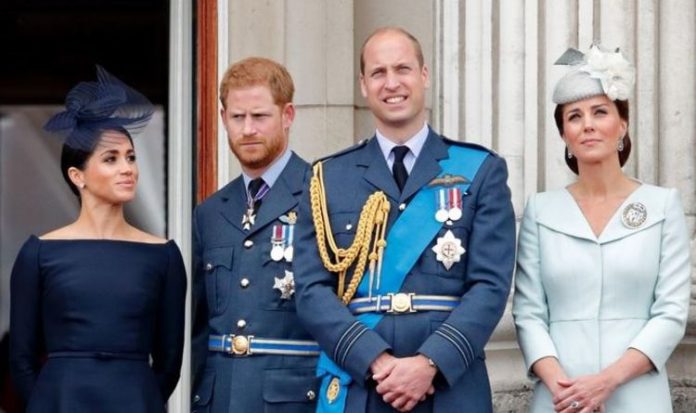 Britons have voted for their most valued male and female figure in a study by YouGov. The poll revealed that the Duke and Duchess of Cambridge “outperformed” the Sussexes, particularly Prince Harry who did not even make the top list.

The study asked 45,000 people from 42 different countries and territories to rank the men and women they admire the most.

In Britain, people voted Queen Elizabeth II as the most admirable woman with an admiration score of 23.29 percent.

In a post on their website, lead YouGov data journalist Matthew Smith said: “Prince Harry, last year’s male fourth place, didn’t even make the cut at all this year, following the controversy caused by his stepping down and moving to America.

“Yet his wife Meghan has had the opposite trajectory, coming from not being ranked last year to 13th on the female list this year.

“Both are outperformed by Prince William and wife Catherine, however.”

Prince William was ranked in third place behind David Attenborough and former US president Barack Obama.

The Duchess of Cambridge came fourth on the women’s list behind Her Majesty, Michelle Obama and New Zealand’s Prime Minister Jacinda Ardern.

The YouGov poll was taken between January and March this year.

The study comes after the Sussexes took the controversial decision to step down as senior members of the Royal Family earlier this year.

The Sussexes announced that they have signed a production deal with Netflix since their royal split.

The Duke and Duchess of Sussex said they want to focus on content “that informs but also gives hope”.

As parents to a one-year old, the couple also plans to make “inspirational family programming”.

But a YouGov poll released earlier this month found that 64 percent of Britons are not interested at all in watching the Sussexes’ content on Netflix.

Only three percent of the respondents said they were very interested in watching the Sussexes’ Netflix shows.

In their statement, the Sussexes said: “Our lives, both independent of each other and as a couple, have allowed us to understand the power of the human spirit, of courage, resilience and the need for connection.