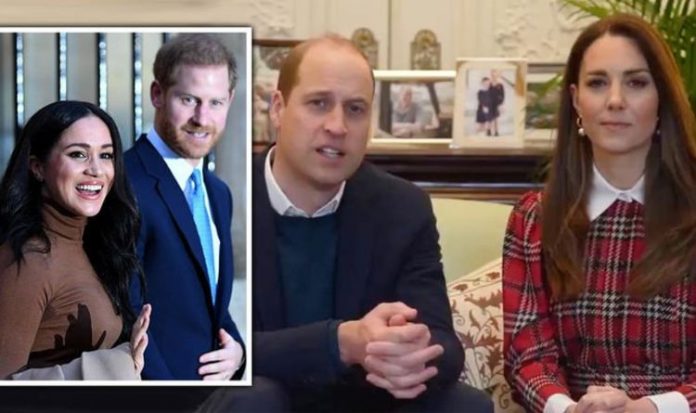 Kate and William were attacked for their thoughtful gesture of donating food to NHS staff on Burns Night. Fans of the Sussexes claimed this was a clear attempt to mimic Meghan and Harry, who donated food to a charity organisation earlier this month.

One fan wrote on Twitter: “Lol. Copying Harry and Meghan with the food donation.”

A third Sussex fan quote retweeted another message claiming the Cambridges were “imitating” Meghan and Harry after they delivered meals to a non-for-profit organisation earlier this month, adding “Oh yes so true”.

Another fan of Meghan and Harry also said: “Didn’t H&M do this a week or so ago?”

This message prompted one royal fan to reply, saying: “What. Think of someone over themselves? You should be a comedian. You are really funny!”

To which the original poster said: “Yep. They donated (paid out of their own, not taxpayers’, pockets) food to a military group that delivers food to homeless in California.”

Amid claims the Cambridges “copied” Meghan and Harry with their donations, another royal fan said: “Sorry, Sussexes didn’t originate this idea.”

The lunch was made by Homegirl Catering, an organisation run by women to help former gang members and prisoners transform their lives.

The warm meals were accompanied by a note in which Meghan and Harry expressed their “thanks and gratitude” to the team of volunteers.

Yesterday, Kate and Prince William gave NHS staff at a Scottish hospital a chance to mark Burns Night with a traditional meal despite the ongoing pandemic.

The Duke and Duchess of Cambridge sent parcels to nurses and doctors working at NHS Tayside, where staff have been working around the clock in the Covid-19 Intensive Care Unit and High Dependency Units following a spike of infections and hospitalisations.

The traditional meal included haggis, neeps and tatties and was sent by Kate and William after they teamed up with their patronage, NHS Charities Together, to get the meal delivered.

The donations appear to have been appreciated by NHS staff, who raised a glass to Burns Night during their call with the Cambridges.

During their video call, Kate and Prince William, who became joint patrons of NHS Charities Together in December, acknowledged the difficult and tiring work carried out every day by NHS staff across the country.

The Duke of Cambridge said: “We want to say a huge thank you for all of the work you are doing and the sacrifices you are making.

“As a token of our appreciation, we’ve teamed up with NHS Charities Together to provide you with a Haggis dinner.”

Kate added: “We hope you enjoy it, and look forward to better times together soon”.

The couple signed off their call saying in unison “Slàinte Mhath!”

Lorna Birse-Stewart, chair of Tayside NHS Board, thanked Kate and William for the gesture and for highlighting the work carried out by the staff at Tayside.

She said: “On behalf of NHS Tayside and Tayside Health Fund I would like to take the opportunity to thank The Duke and Duchess of Cambridge for this wonderful gesture.

“It provides an opportunity for us to recognise some of the patient-facing and support staff across health and social care in Tayside who have demonstrated extraordinary commitment during these most challenging times.”