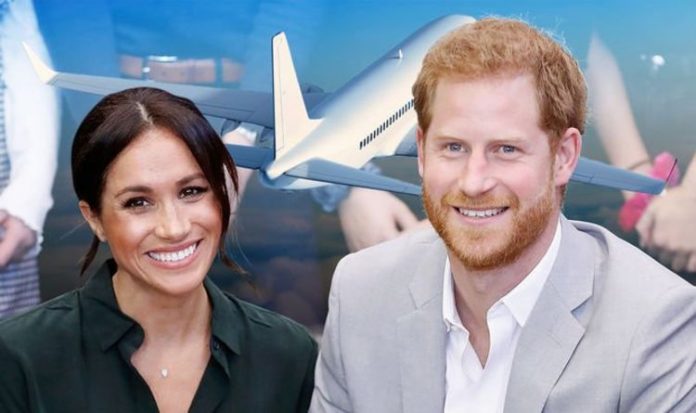 The Duke and Duchess of Sussex last set foot in Britain in March, jetting out shortly after they completed their final royal engagements and making a dash for freedom back to Canada before moving to the US. The couple are reportedly planning to return to the UK to take part in celebrations for Prince Philip’s historic 100th birthday in the summer.

The Duke of Edinburgh will become the first male member of the Royal Family to reach 100 when he marks the milestone on June 10.

According to a report in the Daily Telegraph, Harry and Meghan are keen to attend if the birthday party is given the go-ahead.

The report said: “If coronavirus restrictions allow, the Royal Family will certainly gather for a private celebration, and the Duke and Duchess of Sussex are hoping to fly over from California to attend.

“The date coincides with the Duke’s Invictus Games, due to begin in The Hague on May 29.”

Harry’s Invictus Games were originally due to be held in the Netherlands this year.

But due to the pandemic the competition had to be rescheduled.

The contests, which will see injured and sick veterans battle it out in a number of sports, will run from May 29 to June 5.

Harry, 36, and Meghan, 39, are reportedly seeking a 12-month extension to the Megzit deal they brokered with the Queen.

Talks between the two sides were described as “less confrontational” than the tone struck at the Sandringham summit in January.

The monarch scrambled to call an urgent meeting between the key players after Harry and Meghan dropped the bombshell that they were stepping down as senior royals.

Days later the Queen held a crunch meeting with Harry to discuss a way forward for him and his American-born wife.

Prince Charles and Prince William also took their seats at the table.

Days earlier, Meghan had jetted back to Canada where she dialled in to the conversation.

After the deal was agreed, Harry flew to Vancouver Island where the couple settled into a quiet life until they relocated to California in March.

They have since indicated their desire to remain in Meghan’s home state by forking out £11 million on a mansion in the Santa Barbara city of Montecito.

The area is popular with celebrities and billionaires.

Meghan’s pals Serena Williams and Oprah Winfrey are among the couple’s new neighbours.