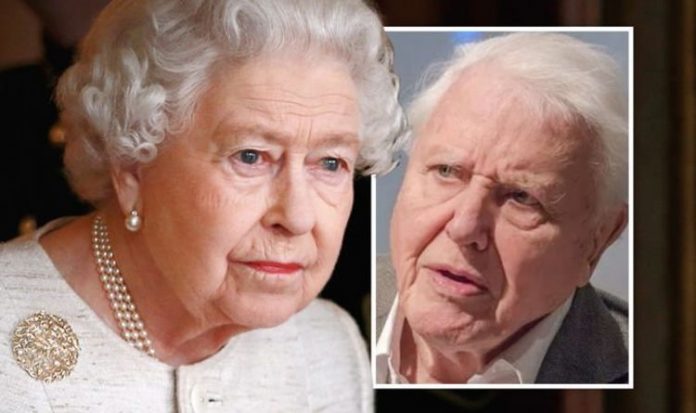 David Attenborough admits he is ‘baffled’ by ‘Yeti footprints’

The TV legend’s voice returns to screens tonight as he narrates Meerkat: A Dynastics Special, which is the sequel to the award-winning 2018 series Dynasties. It sees Sir David tell the story of the vulnerable, but much loved, meerkat and how a group’s young queen, called Maghogho, struggle to create “her dynasty”. The BBC star is known globally for his incredible documentary work, which has seen him garner a plethora of awards and praise for series such as Blue Planet and David Attenborough: A Life On Our Planet.

But during the Sixties, while a controller at the BBC, the 94-year-old unleashed a stinging attack after Prince Philip allowed documentary makers behind the scenes at Buckingham Palace, to create the infamous programme The Royal Family.

According to royal author Ingrid Seward, editor-in-chief of Majesty magazine, at the time the monarchy had “never quite come to terms with the power of television or appreciated its need to reduce its subject matter to the level of a sound bite”.

The 1969 documentary saw the Firm partake in a number of activities, including Philip grilling sausages at Balmoral Castle, while the Queen was seen to chat to ex-US President Richard Nixon in another encounter.

In her book The Queen and Di: The Untold Story, which was published in 2000, Ms Seward detailed how Sir David raged at then-BBC director Richard Cawston over his decision to make the documentary in a letter.

He added: “The whole institution depends on ­mystique and the tribal chief in his hut.

The controversial documentary has since been removed from any public spheres on the Queen’s demands.

The Queen and Philip with children during the documentary (Image: GETTY)

It was shown for the last time in 1972, when the monarch decided it had done more harm than good.

Ms Seward said: “It was a warning which was ignored and, in retrospect, the programme came to be seen to have given fateful encouragement to exactly the kind of intrusive interest in their lives which the royal family were at such pains to avoid.”

The programme was discussed at length during the 2018 Amazon Prime documentary The Story of the Royals, which saw Laura Mayhall, co-editor of Women’s Suffrage in the British Empire, argue it was created by the monarchy to “get out of the heads this notion they were out of touch”.

She said: “It’s really a vehicle for us to see a little bit behind the scenes, so we can understand the monarchy as people like us.”

Prince Charles and Princess Anne during the 1969 documentary (Image: GETTY)

Robert Lacey, historical consultant on Netflix’s The Crown, added: “They realised that if they did something like that too often, they would cheapen themselves, letting the magic seep out.”

Earlier this year, Sir David visited Kensington Palace as he hosted an outdoor screening of his news ‘A Life On Our Planet’ documentary for the Cambridges.

While there, Sir David gave Prince George a tooth from a shark, scientifically known as carcharocles megalodon.

Posting on Instagram, the Cambridges wrote: “Sir David found the tooth on a family holiday to Malta in the late 1960s, embedded in the island’s soft yellow limestone which was laid down during the Miocene period some 23 million years ago.

“Carcharocles is believed to have grown to 15 metres in length, which is about twice the length of the Great White, the largest shark alive today.”

But upon hearing of where the piece was found, Malta’s culture minister Jose Herrera demanded his nation “get the ball rolling” in order to bring the artefact back to its home.

He added: “There are some artefacts that are important to natural heritage which ended up abroad and deserve to be retrieved.”

However, in the following months it was confirmed that no action would be taken, paving the way for George to enjoy his gift.