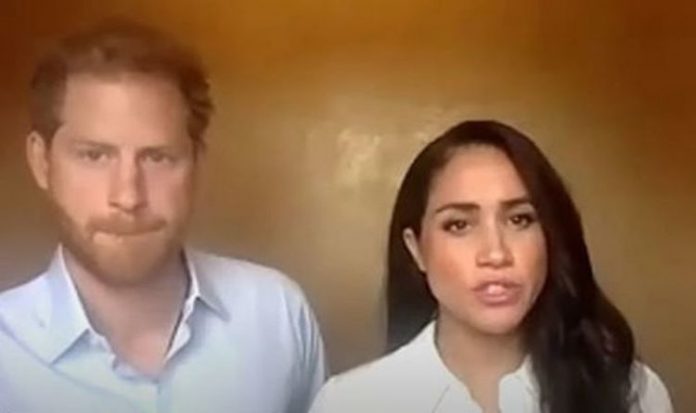 The Duke and Duchess of Sussex will sit down with the veteran TV host for an in-depth conversation about their lives as working royals and their experience outside of the Royal Family, a year on from Megxit. The programme, called Oprah With Meghan And Harry: A CBS Primetime Special, will air on March 7.

It will kick off with the duchess opening up about “stepping into life as a royal, marriage, motherhood” and how “she is handling life under intense public pressure,” according to CBS.

Later on, after Oprah has had a chance to quiz Meghan one-on-one, Harry will appear on the set.

Together, the couple will discuss their move from the UK to the US at the height of the coronavirus pandemic.

They will also touch on their plans for their future as a family away from the royal system.

Royal commentator and biographer Penny Junor has suggested the couple may be woefully unprepared for the intense questioning Oprah is likely to subject them to.

The host is a friend of both the duke and the duchess and lives in the same Montecito neighbourhood as them.

But Ms Junor said despite being friends and neighbours, Oprah will not “go softly” on the couple.

And she warned the Sussexes may not be experienced enough to skirt their way around awkward topics and questions they don’t want to answer.

Harry, 36, has given interviews to the press through the years, both in the UK and while carrying out royal engagements abroad.

He also spoke to journalists while serving with the military in Afghanistan about his life as a soldier.

But his Oprah interview will be a first for the prince when it comes to speaking about his life as a family man.

Harry is known to be fiercely protective of his wife and their son 21-month-old son Archie.

On Friday, Buckingham Palace announced that the couple would not be returning to the Royal Family.

The Megxit deal they signed with the Queen last March included a one-year review and the option to return to the fold.

The monarch, 94, stripped the couple of their royal patronages and Harry of his honorary military titles.

Ms Junor described the Sussexes decision to continue their independent lifestyle as a “natural next step” a year on from Megxit.

She said since moving to the US last March, they have “entrenched themselves in California” and have shown no signs of returning to their old roles.

Ms Junor added: “It did not look as though they were coming back.”