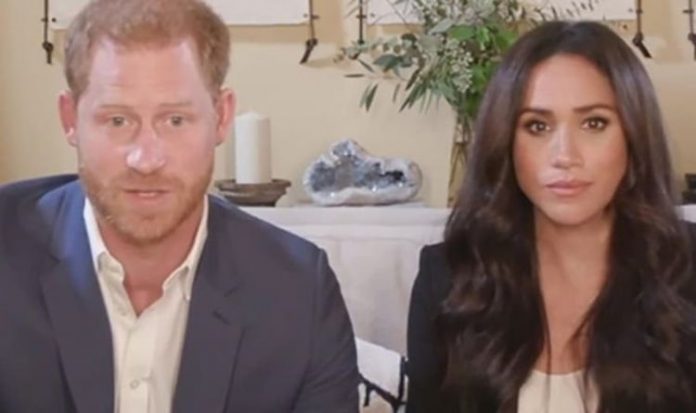 Meghan Markle and Prince Harry told listeners why the gospel song This Little Light of Mine has such a special meaning to the couple. The popular song, which holds strong connections to the US civil rights movement, played out at the end of their first Archewell Audio podcast episode on Spotify. Before it played, Meghan noted that the song also played at the end of their wedding in May 2018.

The Duchess of Sussex explained: “‘This Little Light of Mine’ played at the very end of our wedding while we were walking down the steps of the church.

“It was the music that we wanted playing when we started our lives together.”

Quoting civil rights icon Martin Luther King, Meghan added: “Because as we all know, ‘darkness cannot drive out darkness, only light can do that’.”

Harry echoed this, saying: “The message of this song is one we hold so dearly.”

He added: “It’s about using the power we each have within us to make this world a better place.”

The highly-anticipated podcast featured some of Meghan and Harry’s famous friends, including Sir Elton John and James Corden.

Guests on the podcast, which was billed as a ‘holiday special,’ all reflected on 2020 and their hopes for 2021.

Earlier this year, the couple struck a podcasting deal understood to be worth £30 million with Spotify.

Harry told listeners: “As we all know, it’s been a year. And we really want to honour the compassion and kindness that has helped so many people get through it.”

Meghan added: “And at the same time, to honour those who have experienced uncertainty and unthinkable loss. Our thoughts have been with you, especially during this holiday season.”

Earlier this week, it emerged that Harry and Meghan “want a 12-month extension to the Megxit deal that would see them keep their royal patronages beyond March 31 deadline”.

Prince Harry reportedly also wants to return to the UK to attend both the Queen and Prince Philip’s birthdays next year.