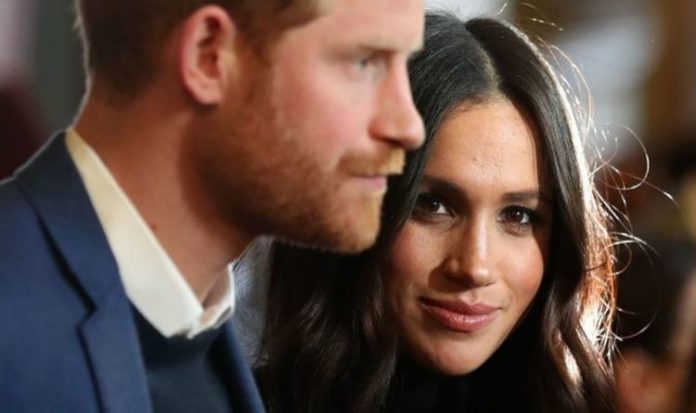 On Saturday it was revealed Meghan Markle’s name was changed on Archie’s birth certificate a month after he was born. Her first names “Rachel Meghan” were removed, leaving “Her Royal Highness the Duchess of Sussex” in its place. But just hours after the report emerged, a spokesman for the Sussexes denied that Meghan was behind the change.

A spokeswoman for the Duchess of Sussex said: “The change of name on public documents in 2019 was dictated by The Palace, as confirmed by documents from senior Palace officials.

But the claim is understood to have angered the Palace, as Meghan and Harry appear to have directed the blame at royal courtiers.

Commenting on the matter, royal expert Rebecca English told the Daily Mail the issue remains “confidential”, but the commentator believes the Sussexes must have some proof the Palace was behind the move.

She said: “But if Harry and Meghan thought this would put a swift end to the matter, they were mistaken.

“Their thinly veiled criticism of ‘the Palace’ seems only to have escalated the situation.

“By ‘the Palace’ they presumably meant Buckingham Palace, to which their Kensington Palace-based staff then reported.

“The Sussexes clearly believe they have hard evidence to support the suggestion that the Palace ‘dictated’ to them — although this remains confidential, as it would involve internal communications.”

JUST IN: Kate and Prince William suffer with major ‘gap’ as Camilla ‘not keen’

Buckingham Palace has not made an official statement regarding Meghan’s name change on Archie’s birth certificate.

But royal insiders have said the Palace was not involved in the move and the Duke and Duchess’ aides were actually behind the name change.

A royal source told : “The birth certificate was changed by the former office of the Duke and Duchess of Sussex they had when they were working members of the royal family.

“It was changed to ensure consistency of the name and title of the Duchess with other private documents.”

His birth was registered on May 7, with Meghan using both her first names on the certificate.

The official document was changed on June 5.

Rachel is Meghan’s real first name, but she chose to go by Meghan earlier in her acting career prior to her life in the Royal Family.