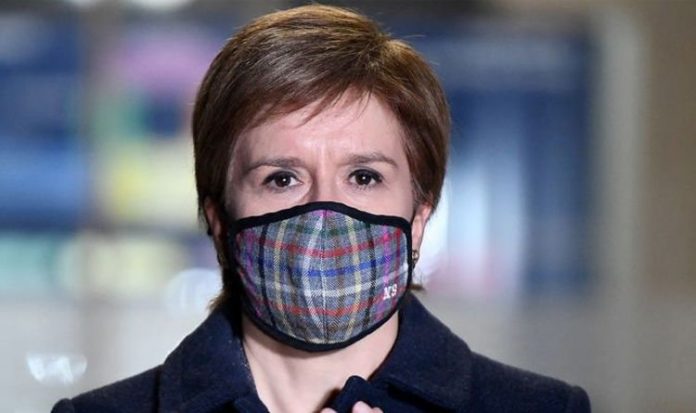 The nationalists claim victory in May’s Scottish Parliament elections, which polls suggest is likely, will provide a mandate for another referendum.

However, Mr Johnson is refusing to approve a rerun arguing the question was “settled” when Scotland voted to remain part of the UK in 2014.

He pointed out senior SNP politicians insisted this would be a “once in a generation” vote ahead of the poll.

Mr Lewis advised the Prime Minister on no deal Brexit preparations ahead of the new trade deal being agreed with the EU in December.

According to Ms Kuenssberg, the Prime Minister will use his Brexit ties, by ensuring Mr Lewis leads an “expanded union unit” aimed at keeping Scotland in the UK.

The move removed a link between Downing Street and the Scottish Conservative Party, as Mr Graham was MP for Ochil and South Perthshire between 2017 and 2019.

However, the BBC’s veteran reporter said the Scottish Tories are “not crying buckets” at the move as they believed Mr Lewis lacked the requisite authority and personal relationship with Mr Johnson.

Ms Kuenssberg said on Twitter: “Oliver Lewis, who worked on Brexit and Vote Leave, who is closer to PM, will be leading what sources say will be an expanded Union unit”.

The analysis only looked at the impact of separation on trade and didn’t include other potential costs, such as a fall in inward investment.

Currently, around 61 percent of Scotland’s exports and 67 percent of its imports are traded within the UK.

If Scotland left the union new trade barriers could significantly increase the costs of these transactions.

The report concluded: “This analysis shows that, at least from a trade perspective, independence would leave Scotland considerably poorer than staying in the United Kingdom.”

Tensions in Scotland increased following the 2016 Brexit vote which saw a majority of Scots backing ‘Remain’.

Ms Stugeon has vowed to hold a second “legal” independence referendum and has threatened legal action if the British Government continues to resist.

Mr Johnson has called for a 40-year gap between constitutional referendums in the UK.

This would prevent any second referendum on Scotland leaving the British union until 2054.