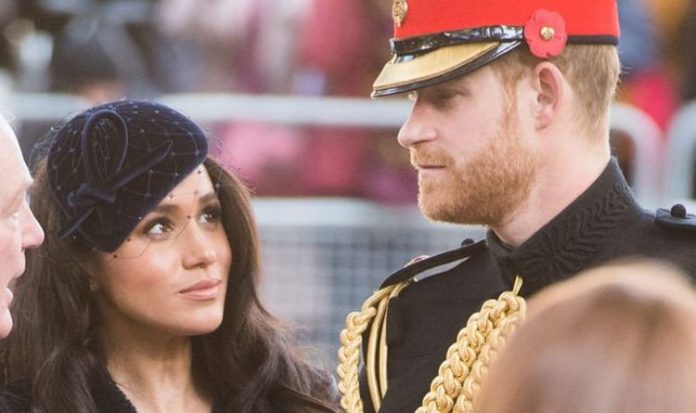 The Duke and Duchess of Sussex will be hosting a podcast on Spotify, including a holiday special coming out during the festive period. Meghan and Harry said in a statement: “What we love about podcasting is that it reminds all of us to take a moment and to really listen, to connect to one another without distraction. “With the challenges of 2020, there has never been a more important time to do so, because when we hear each other, and hear each other’s stories, we are reminded of how interconnected we all are.”

The podcast, which was arranged by the couple’s newly formed production company Archewell Audio, will aim to uplift and entertain audiences.

The couple will be looking forward to their podcast debut around Christmas, as well as celebrating with their one-year-old son Archie Harrison Mountbatten-Windsor.

Last year, the couple spent Christmas in Canada away from the pressures of royal life, and reemerged afterwards with their plan to step down as senior royals.

They said in a statement that they were “enjoying sharing the warmth of the Canadian people with the beauty of the landscape”.

Meghan and Harry were rejected by a local business in Canada last year (Image: GETTY)

Unfortunately, they were rejected by a local resident, who turned down the couple’s request to eat at his restaurant, due to the hassle of the security that comes with hosting royals.

Harry and Meghan’s security identified their place as a potential dining spot around this time last year.

However, Mrs Koffel told the Vancouver Sun her chef husband turned down the couple’s request over the phone.

Harry and Meghan will be celebrating Christmas with their son Archie Harrison (Image: GETTY)

She said security guards came to the restaurant and spoke to her ahead of time.

The restaurant-owner revealed: “They said, ‘How did you figure out who we were?’ And I said ‘It wasn’t too hard’.”

However, her husband was the one who answered the phone when the royals wanted to make a reservation and he turned them down due to the security required.

She said to the local paper: “You know what Pierre’s like. We’ll see what happens.”

Mrs Koffel said she wanted the Sussexes to have the best time possible, and had spotted them in town.

She said: “Horth Hill’s become a very popular place now. And they jog around, so they’ve been seen.

“It’s kind of exciting. I hope everything goes fine for them.

“They’re breaking away from tradition and I just wish them all the best.”

She added: “Let them have their peace and quiet. For us to be so lucky to have them in the area, how lucky is that.

“I wish them all the privacy they can possibly get. They deserve it.”

Ms Koffel added that she had bought two books for the family as a gift and planned to send them to them.

She chose Paseka: A Little Elephant, Brave by Ruth James because of the couple’s love for Africa and elephants, and Neekah’s Knitting Needle, illustrated by her neighbour Sheena Lott.

She said: “I hope to meet them one day. I hope they get my book.”

Soon after Christmas last year the couple announced their decision to step down as senior royals and whisked themselves back to Canada.

They then moved to Los Angeles, where they stayed in a friend’s mansion, before buying their £11.4million property in Montecito.

There is much speculation as to what their holiday special podcast will include, but many expect them to use the audio platform to promote causes close to their hearts.