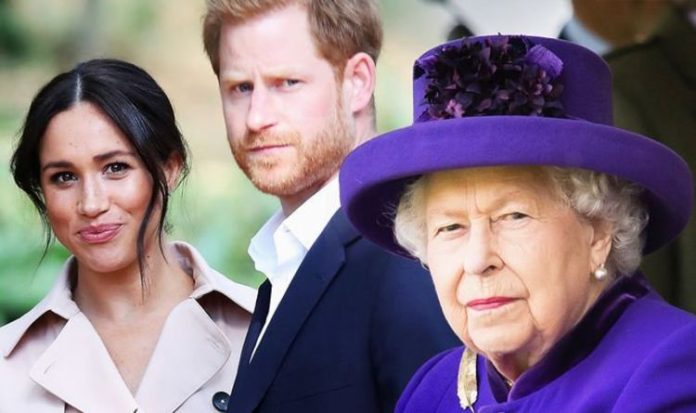 Royal commentators Chris Ship and Lizzie Robinson reflected on the unfriendly conclusion of Megxit. While speaking on their show, the Royal Rota, Mr Ship highlighted the importance of Meghan Markle and Prince Harry‘s statement after losing their royal titles. Last week, the Palace released a statement saying: “It is not possible to continue with the responsibilities and duties that come with a life of public service.”

Meghan and Harry subsequently released a statement saying: ‘We can all live a life of service. Service is universal.”

Mr Ship insisted it was clear the couple were growing frustrated with hiding how “acrimonious” talks between the Queen had become.

He said: “It is highly unusual as you don’t get anyone publicly criticising the Queen.

“I wonder in hindsight whether they would still conclude their statement was a good idea.

DON’T MISS: Prince Harry told he ‘made fool of himself’ in ‘puerile’ TV interview

“It is almost like they didn’t want to hide the disagreements that existed.”

Mr Ship added that the end of the negotiations were likely tense, in part, due to the revelation of the Oprah Winfrey interview.

He continued: “Our understanding of how last week unfolded is that it was on Monday that we revealed the Oprah Winfrey interview and therefore the final negotiations between Team Sussex and Buckingham Palace were kind of sullied.

“The atmosphere became more tense as a result because Buckingham Palace clearly didn’t know anything about the Oprah Interview and you can imagine they weren’t particularly happy about it either.

“But the Queen has made it quite clear from the moment they wanted to step away as working members of the Royal Family that it is impossible to have one foot out and one foot in.

“You are either in and you are serving the Royal Family or you are out.

“Harry and Meghan have made it clear that they want to be out and pursue a life of big deals with Spotify and Netflix and sit down interviews with Oprah.

“They can’t have their cake and eat it.”