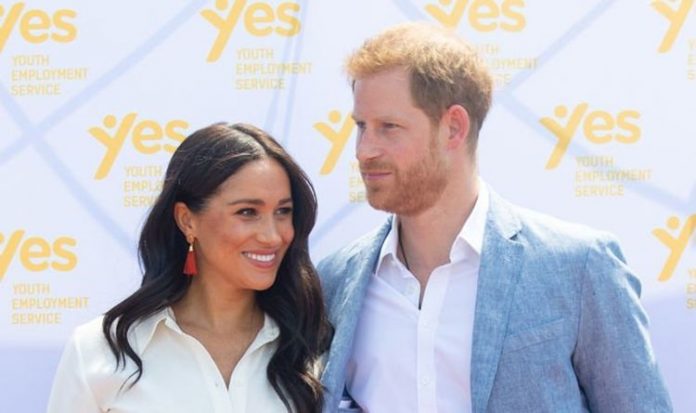 The Duke and Duchess of Sussex have not been back to the UK since moving to California, due to the coronavirus pandemic. However, they may step foot back in the country for a very special occasion: Trooping the Colour. Trooping the Colour is the Queen’s birthday parade in June for which all the royals usually show up to wave on the balcony of Buckingham Palace.

Last year, the ceremony was a vastly scaled-down version at Windsor Castle with Her Majesty being the only royal present, and it was not open to the public.

This year, the Palace is said to be “hopeful” Trooping the Colour can happen as normal, but many view this as quite optimistic.

Trooping the Colour involves 1400 soldiers, hundreds of band players and thousands of people gather to watch.

Such a large celebration will be unlikely to be happening as early as June, given the current situation regarding COVID-19.

READ MORE: Meghan and Harry’s corporate partners ‘will want their pound of flesh’

Meghan Markle and Prince Harry to be invited to London (Image: GETTY)

That said, one royal expert insisted there is “no doubt” Meghan and Harry will be invited.

Mr Myers said: “The Palace are saying they are hopeful. Listen, we’re all hopeful ‒ I’m really hopeful of being able to see friends and family as soon as possible, everyone’s dying to do it, aren’t they?

“But hopeful of perhaps doing a tour later on in the year, that would be absolutely wonderful.

Trooping the Colour’s balcony scene is unlikely to happen this year (Image: GETTY)

“But things are not going to be back to normal until people have been vaccinated and certainly there won’t be any balcony moment.

“And maybe Harry and Meghan will be invited back to London to attend ‒ no doubt they will be!

“Harry and Meghan, let’s not forget, have quite a packed schedule.”

He listed off the couple’s plans for this year, which include the Invictus Games in The Hague as the end of May.

The Invictus Games are a Paralympic-style multi-sport event for injured, sick or wounded armed service personnel and veterans.

Prince Harry founded the event back in 2014 and it has been his passion project every since.

The Games in The Hague have already been postponed for a year after originally being due to happen in May 2020.

Meghan Markle and Harry ‘wanted to be celebrities’ says Smith

Then, there is Prince Philip’s 100th birthday on June 10, and then Trooping the Colour on June 12.

Then, on July 1, Harry and his brother Prince William are due to unveil a statue of their mother Princess Diana in the Sunken Gardens at Kensington Palace.

However, there is a good chance none of these events happens in the way they normally would.

Large crowds gather for Trooping the Colour each year, and Philip’s 100th birthday celebrations have the potential to be huge too.

Mr Myers said he thinks it is unlikely that the Invictus Games, Trooping the Colour or a large public celebration for the Duke of Edinburgh is likely to happen.

The unveiling of the fountain has the potential to be the most controlled and private, but Harry would need to be able to make it over from the US.

Mr Myers said: “Now I think [the statue unveiling] is probably the most likely of all of those things to take place, because that could be very, very stage-managed.

“You could have it with a small rota to be able to capture the moment with a photographer and a reporter and a TV crew and it could all be managed quite easily.

“I mean, I’m depressing myself a little bit, we need something to look forward to.”

To subscribe to Pod Save the Queen go to your norma podcast provider.