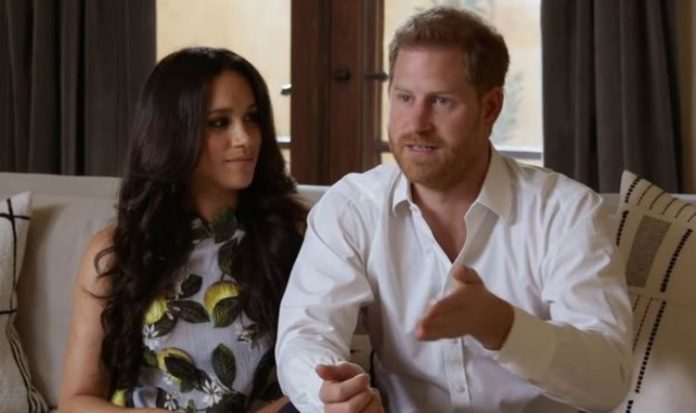 The Duke and Duchess of Sussex recorded their 90-minute documentary with the American TV host last week shortly before they publicly announced they would not be returning as working royals. A source has told E News that the couple will be “speaking their truth” now that they are no longer subject to the rules and protocols of Buckingham Palace.

The pair are said to be flooded with relief a year on from their dramatic exit from the Firm, dubbed “Megxit”.

And they will use the highly anticipated CBS special, set to hit screens on March 7, to air their side of the dramatic story.

A source explained: “There is a lot of tension between them and the Royal Family.

“The interview is going to shine a light on what they have been through.

“Meghan and Harry are relieved they are away from it all.”

And the couple will touch on the subject of mental health, a topic which is close to both their hearts.

The insider claimed: “They are going to touch on a lot of how mental health came into play and how it affected them.”

Harry, 36, and Meghan, 39, shot the interview at an unknown location in California, the duchess’ home state.

The source said: “Having an institutional voice within the royal family wasn’t enough [for Meghan].

“This interview will be the loudest way she’ll get her voice back.

“When they first started dating Meghan felt she had lost her voice.

“She had had a platform as a moderately successful actress, and when she was told to stop using her social media and be careful what she said, I could tell that loss of voice and independence pained her.”

Before she tied the knot with the Queen’s grandson’s Meghan closed down her social media profiles and her lifestyle website, The Tig.

She had used the site to connect with fans and offer tips on travel, cooking, fashion and beauty.

Members of the Royal Family are strongly discouraged from oversharing details about their private lives with the public, including on social media.

During her acting days in Toronto, Meghan often posted candid snaps showing her relaxing at her rented home in the city, giving viewers an insight into her living quarters.

While royals do sometimes post personal photos online, they are keen to guard their privacy and rarely reveal what the inside of their homes looks like.