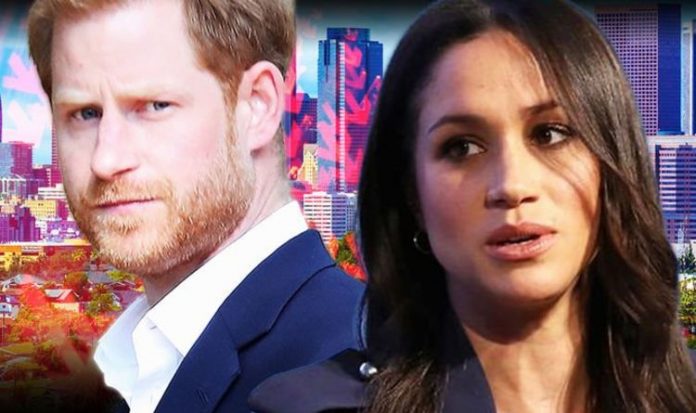 Meghan Markle and Prince Harry will turn their focus to the United States and the Commonwealth instead of the UK, a royal commentator has said: Richard Fitzwilliams spoke to the Daily Express about the Duke and Duchess of Sussex’s future outside the Royal Family. He explained that although it was still unclear what the couple would do when they split their time in Britain, it would not “bother them as such”.

Mr Fitzwilliams said: “They could still give help to their British charities from Hollywood.

“Even though of course there’s the fact that they’re in Hollywood and the fact that when they comment on things that’s held against them by certain newspapers.

“But their focus isn’t Britain, they’re not that popular here as a couple.

“Harry’s always been popular but that’s not so much the case anymore.”

READ MORE: Meghan Markle ‘much more popular’ around world than in UK – revealed

He continued: “The facts simply are that this wouldn’t bother them as such.

“The emphasis on their lives, in their work, is the United States, it’s obvious.

“Also, to some extent, the Commonwealth will be included in this.

“This is the tragedy from the monarchy’s point of view because they would have such wide appeal in the Commonwealth.”

YouGov revealed at the end of October that Harry and Meghan’s scores on their Royal Favourability tracker had reached their lowest point to date.

The Duke strongly divides public opinion with 48 percent of adults having a positive impression of him and 47 percent having a negative view.

Meghan reportedly evokes a positive response among a third of UK adults (33 percent) but nearly six in ten (59 percent) have a negative opinion of her.

The Duke and Duchess are popular among younger Britons however, carrying high scores among adults aged 18 to 24.

Other Royal Family members including the Queen, Prince William, and Kate, Duchess of Cambridge, have enjoyed sustained high scores throughout the pandemic.