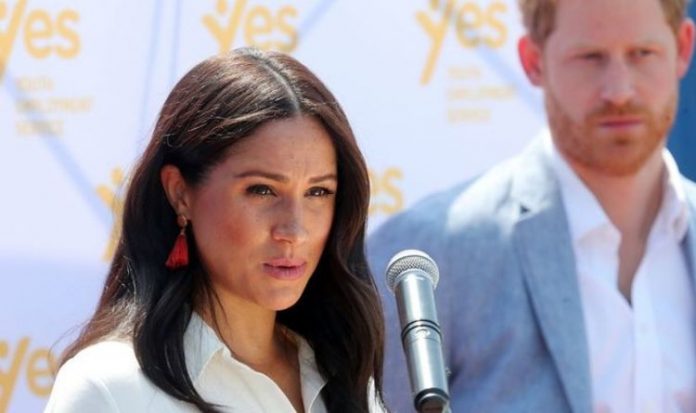 The Duke and Duchess of Sussex have been notably absent voices on social media since stepping down from royal duties last year. In a recent interview with Fast Company, Harry, 36, said he and his wife, 39, would return to the platforms “when it feels right for us”.

He said he and Meghan could possibly make their comeback “when we see more meaningful commitments to change or reform” from the organisations behind the platforms.

But brand expert Eric Schiffer has issued a warning over Harry and Meghan’s planned strategy.

He said staying off social media while they are trying to build a name for themselves outside of the Royal Family would be detrimental to their efforts.

Mr Schiffer, the chairman of Reputation Management Consultants, said the Sussexes would need exposure on social media to help their projects get off the ground and thrive.

He also questioned why Harry and Meghan were so keen to steer clear of Twitter, Facebook and Instagram and suggested it could be because of fear of criticism.

He told Insider: “If they believe in their choices, why aren’t they comfortable putting themselves out there?

He added: “If you’re trying to stay alive with the 11-40-year-olds, you’ve got to be front and centre on social.”

Speaking to students on the popular Teenage Therapy podcast last year, Meghan opened up about her experience of being trolled online.

Touching on the subject of hateful speech on social media, she said: “I can speak personally too, I am told that in 2019 I was the most trolled person in the entire world – male or female.

“Now, eight months of that I wasn’t even visible, I was on maternity leave with the baby.

“But what was able to be manufactured and churned out it’s almost unsurvivable, it’s so big you can’t even think what that feels like.”

The pair have signed a contract with the streaming giant estimated to be worth around £100m.

They will produce documentaries, movies and children’s shows.

It is not clear if the duke and duchess will return to social media to promote their productions, or if the responsibility for promotions will fall on Netflix.