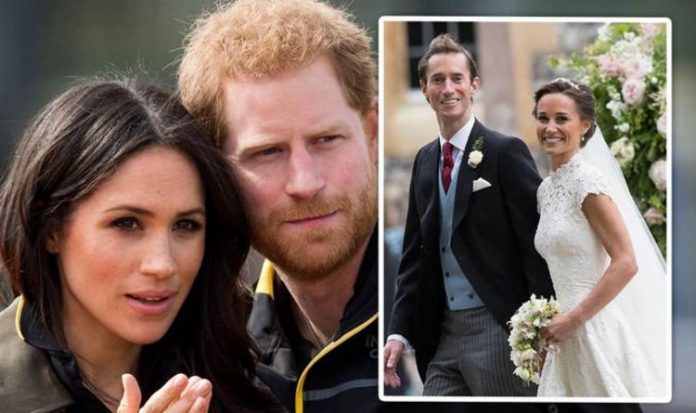 Meghan was on the guestlist for Pippa and James Matthews’ wedding in May 2017. However, the Duchess of Sussex decided it was better for her not to head to St Mark’s Church in Englefield, Berkshire, after a British tabloid published a paparazzi picture of herself in yoga pants next to a famous snap of Pippa taken at the wedding of the Duke and Duchess of Cambridge, according to the authors of the biography Finding Freedom.

But while Harry had to venture alone at the nuptials, Meghan decided to still attend the wedding reception at the Middletons’ home alongside her then-boyfriend.

Rather than wait for the prince in London, however, Meghan and Harry came up with “a clever workaround” to avoid a long journey and let the future Duchess to snuck in more easily at the reception, the authors Omid Scobie and Carolyn Durand said.

They wrote in their biography: “While in the days after the affair it was assumed that Harry had headed out to St Mark’s Church in Englefield, Berkshire, solo, before returning to London to grab Meghan for the reception on the grounds of the Middleton’s Bucklebury home, logging some 150 miles of travel, the pair had actually come up with a clever workaround.

“The morning of the vows, the couple made the hour-long drive out to Berkshire together.

“Harry dropped Meghan off at the Airbnb a close friend and fellow wedding guest had rented before continuing on to the chapel.

“While all the other guests were at the ceremony, Meghan changed into a decidedly unflashy long black gown and did her own makeup.

“A hairdresser had been dispatched to Kensington int he early morning.

“Following the 11.30 service, Harry returned to the rental home to have lunch with Meghan before driving them over the reception site in a black Audi, the pair arriving just as a Supermarine Spitfire fighter plane was launching into an aerial performance for guests.”

Worries Meghan could overshadow the bride had crept in also in the minds of Pippa and her mother Carole Middleton, according to Ms Durand and Mr Scobie.

The book read: “The media frenzy that followed their every move made them somewhat of a reluctant addition the guestlist for Pippa Middleton’s bows on May 20, 2017.

“Both the bride and her mum, Carole, privately harboured concerns that the American actress’s presence alongside Harry might overshadow the main event.”

Finding Freedom details the love story of Meghan and Harry as well as their relationship with the Royal Family and courtiers.

The authors have denied any involvement of the Sussexes in the making of this unauthorised biography.

Mr Scobie told ITV’s Lorraine: “I know there are a lot of rumours and talk about the couple cooperating with the book and us having secret interviews with them, and this was not the case.

The authors said to have worked with dozens of sources close to the  couple as well as palace insiders.

On the final page of their book, they wrote: “We have spoken with close friends of Harry and Meghan, royal aides and palace staff (past and present), the charities and organisations they have built long-lasting relationships with and, when appropriate, the couple themselves.

“In many instances, we have granted sources anonymity to allow freedom to candidly provide direct quotes without their names being attributed (either due to the sensitivity of roles or to protect careers).”

The book Finding Freedom: Harry and Meghan and the Making of a Modern Royal Family by Carolyn Durand and Omid Scobie is now available for digital download and in hard copy.