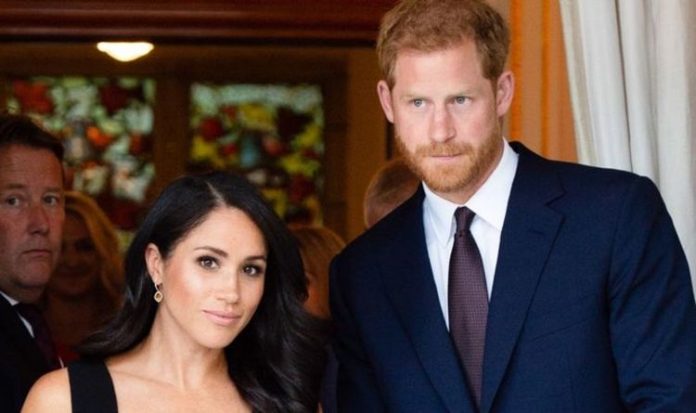 Meghan and Prince Harry have made a definite choice when they stepped down as senior royals in late March, royal author Robert Lacey claimed. The Duke and Duchess of Sussex are unlikely to return into the royal fold with the statuses they had in 2018 and 2019, the commentator argued.

This decision will leave the Royal Family divided, he added.

“I don’t see Harry and Meghan ever being working members of the Royal Family in the future.”

Mr Lacey, the author of Battle of Brothers, drew a parallel between Meghan and Harry’s choice to leave the Royal Family as working royals and the constitutional crisis sparked by Edward VIII’s abdication.

He claimed: “I make frequent comparisons between the current situation and Edward VIII’s abdication crisis, both are essentially conflicts between love and duty.

“Harry stands for love and Harry has gone into exile.”

Edward VIII succeeded to his father King George V in early 1936 but, asked to choose between marrying American socialite Wallis Simpson and leading his country, he decided to abdicate in December of that same year, months before his coronation at Westminster Abbey.

Edward VIII and Mrs Simpson moved to France and married in 1937.

King George VI, Edward VIII’s brother and the future Queen’s father, gave them the titles of Duke and Duchess of Windsor.

However, while the former monarch was also styled as His Royal Highness, Mrs Simpson was never given that same honour by the Crown.

Meghan Markle and Prince Harry are yet to launch the Archewell Foundation (Image: GETTY)

Prince Harry and Meghan were given the titles of HRH The Duke and Duchess of Sussex in May 2018, on their wedding day, as a present from the Queen.

The pair still hold their full titles, but have relinquished the use of their HRH styles as part of the deal struck at Sandringham in January.

The Queen, Prince Charles, Prince William and Prince Harry attended this summit days after the Sussexes had announced on Instagram their intention to step back as senior royals and to work part-time on private and financially profitable projects while also representing the Crown.

According to reports at the time, this ‘half in, half out’ solution was not deemed workable by the Queen and her two direct heirs.

The summit resulted in Harry and Meghan agreeing to no longer carrying out royal engagements as well as use their first brand, Sussex Royal, due to a request to drop the use of the word ‘royal’ for any of their future endeavours.

In turn, the Sussexes were given the freedom to live abroad, to continue support their patronages and to work.

Since March 30, when they officially bowed out of their popular Instagram account Sussex Royal, Meghan and Harry have struck a multi-year deal as TV producers with Netflix, bought a home in California and have supported various charitable initiatives.

Meghan and Harry are also working behind the scenes to the launch of Archewell, their foundation, and have taken part in several virtual summits to speak about topics and causes close to their hearts.

The terms of Meghan and Prince Harry’s so-called Megxit deal will be reviewed in March 2021, one year after the couple stepped down.

The Sussexes spoke about the decision to put in place a review in a long statement issued in February, in which they detailed the terms of their transition to non-working royals.

Speaking about the review, they said: “While there is precedent for other titled members of the Royal Family to seek employment outside of the institution, for The Duke and Duchess of Sussex, a 12-month review period has been put in place.”