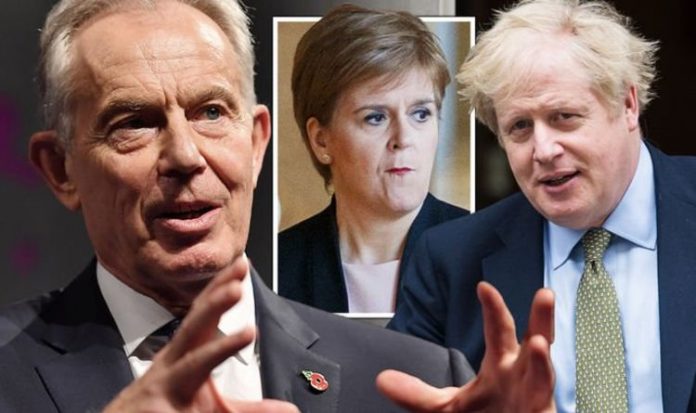 In a Zoom call with around 60 northern Conservative MPs on Monday evening, Mr Johnson described devolution as a “disaster” and as “Tony Blair’s biggest mistake”. The comments immediately drew the ire of politicians across the spectrum. Scotland’s First Minister, Nicola Sturgeon, responded on Twitter saying: “Worth bookmarking these comments for the next time Tories say they’re not a threat to the powers of the Scottish Parliament – or, even more incredibly, that they support devolving more powers.

A Downing Street source did not deny Mr Johnson had told MPs that devolution had been a disaster, but stressed that the remarks referred to Scottish National Party (SNP) mismanagement.

Nevertheless, the Prime Minister’s comments have been seen as especially provocative with support for Scottish independence showing a sustained lead in polling throughout 2020.

Mr Blair, the prime architect of devolution, delivered his 1997 manifesto commitment to hold referendums, with Scotland and Wales voting for their own parliaments, and unionists and nationalists in Northern Ireland forming a power-sharing coalition following the 1998 Good Friday Agreement.

It was the former Prime Minister himself, though, who admitted his legislation “was a mistake”.

Echoing Mr Johnson’s remarks, in a 2015 book entitled “British Labour Leaders”, Mr Blair admitted that he did not understand at the time the importance of maintaining cultural unity between the different parts of the UK.

Interviewed by the book’s editors, former Cabinet minister Charles Clarke and University of East Anglia politics lecturer Toby James, Mr Blair said: “I did feel that we made a mistake on devolution.

“We should have understood that, when you change the system of government so that more power is devolved, you need to have ways of culturally keeping England, Scotland and Wales very much in sync with each other.

“We needed to work even stronger for a sense of UK national identity.

“But I don’t accept the idea that we should never have done devolution.

“If we had not devolved power, then there would have been a massive demand for separation – as there was back in the Sixties and Seventies.”

In an exclusive interview with Express.co.uk, Lord Salisbury criticised Mr Blair’s actions, arguing that it was the nature of the devolution bills of the late Nineties that led to today’s Scottish crisis, and not the 2016 EU referendum.

The former Leader of the House of Lords said: “I think the danger was always there in the nature of devolution.

“Brexit accelerated a crisis which was already there but I don’t think it introduced a new question.

“The devolution legislation that was introduced by the Blair government after the 1997 election was half-cooked and it led to a sort of higgledy-piggledy state of affairs, in which there was very little coherence left in our constitutional arrangements.

“This gave the initiative to people who wanted to break up the United Kingdom and put us, the unionists, on the back foot.”

Lord Salisbury added: “It seems to me that therefore, like any good Tory, you try and conserve.

“But when you realise that what you have no longer works, you look for a solution that is practical and does work.”

Lord Salisbury is currently campaigning with other members of the Constitution Reform Group for the Act of Union Bill – a ready made blueprint, which aims to “rebalance and stabilise the constitutional relationships between the four nations of the United Kingdom”.

The bill sets out a new constitutional framework for the UK, which includes provisions for English devolution, subject to a “commencement referendum” in all four parts of the state.

It also provides an option for the House of Lords to be replaced by a new elected chamber to represent “a new federation of the UK”.