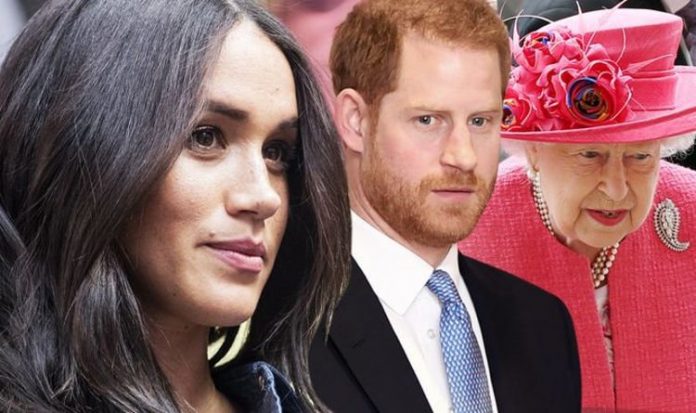 Royal expert Charlie Rae and TalkRadio commentator Kevin O’Sullivan, discussed Prince Harry’s upcoming UK trip. Mr O’Sullivan claimed Meghan Markle was snubbing the Queen by not coming to the UK. Mr Rae agreed and insisted it was “staggering and disgraceful” behaviour from Meghan and an insult to the Royal Family.

Mr O’Sullivan said: “We know Prince Harry is coming to the UK to see his family in the next few months.

“At one point it was supposed to be next month but now it seems to be early summer, he is definitely coming in the not too distant future.

“It turns out that Meghan Markle is very unlikely to join him on this trip.

The royal commentator attacked the Duchess of Sussex and highlighted the importance of the UK trip.

He also listed the important Royal Family events set to be held in 2021.

Mr Rae said: “I think it is absolutely disgraceful and as you quite rightly say, this is a definite snub.

“The Queen specifically invited Harry and Meghan to attend Trooping the Colour which marks the Queen’s 95th official birthday.

He said: “I find it absolutely disgraceful that she has made a decision but she has leaked the decision so that we are all ready for it and everything else, it is appalling.

“Now the last time that Prince Charles, as the grandfather, and the Queen, as the great grandmother, saw little Archie was when he was 6 months old.

“He is going to be two-years-old in May, it is staggering that this woman continues to snub the Royal Family in this fashion.”