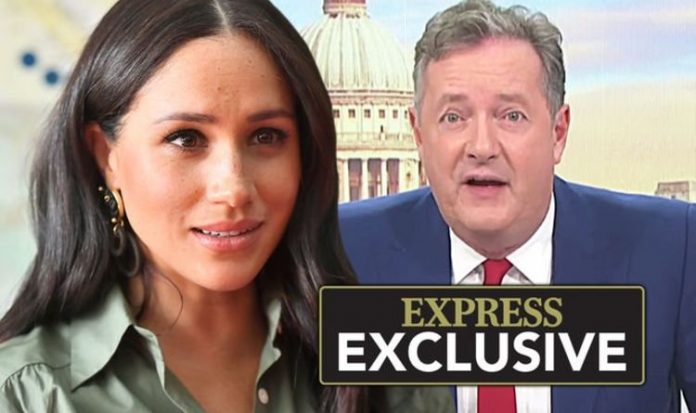 Piers Morgan has been a vocal critic of Meghan Markle for several years, despite the pair having a brief friendship. In an exclusive interview with Express.co.uk the journalist didn’t hold back on his views of the Duchess and branded her a “ruthless social climber”.

He said: “This is all about Meghan Markle becoming a bigger mega-star.

“That has always been her plan, I am sure of it.

“When I was still friends with her she was pretty open about her ambition.

“The way she treats friends and family is pretty indicative of a ruthless social climber who will stop at nothing to get where she wants to get to and I’m sure she thinks the sky is her limit.

“She’s landed her Prince and she’s wrestled him away from his family.”

Mr Morgan said he believes Meghan to have a “ruthlessly ambitious streak”, which is evidenced by their fleeting friendship.

He explained the Duchess reached out to him several years ago, prompting the pair to meet up over a drink while she quizzed him for advice on handling the media, amongst other things.

He said: “I think along with Donald Trump, Brexit and coronavirus, the Sussexes have made themselves one of the biggest news stories in the last three years and they don’t want to be left alone.

“So I don’t really understand the criticism; I’m a columnist, I’m on TV every morning, I’m on Twitter all the time, obviously they are the fourth biggest story of the past three years so obviously I’m going to be commenting about it.”

“And because of my own knowledge about Meghan Markle and previous, what I assumed was, friendship has given me a bit of an insight into what she is like.

“I don’t have any obsession with her…

“I don’t think my criticisms of her are anything other than genuinely valid criticisms of a couple who just want to have their royal cake and eat it.”

Mr Morgan further criticises the Duke and Duchess of Sussex in his new book, Wake Up.