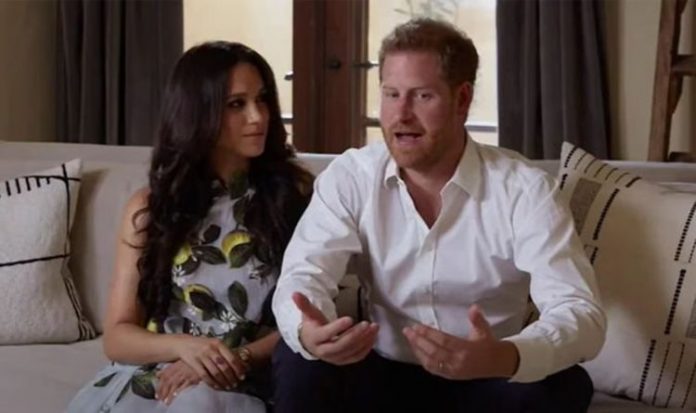 The Duchess announced she is pregnant earlier this month. Prince Harry and Meghan made a surprise appearance at a Spotify live event to promote Archewell Audio, their podcast.

Due to the coronavirus pandemic, this was made via video from their home in Santa Barbara.

During the event, Meghan was spotted wearing a bright pink sapphire ring made by Ecksand.

Royal fans posted their reactions to the ring on Instagram.

One asked: “Is the ‘pink’ ring an ‘indication/hint’ that it might be a little girl?”

Another questioned: “Is this pink stone a hint?”

A third posted: “Was that her subtle way of saying I’d having a GIRL?”

One other Instagram user simply posted “IT’S A GIRL!!!!” followed by a number of pink love hearts.

A number of other celebrities made virtual appearances at the Spotify live event including Justin Bieber and Brene Brown.

The Sussexes released the first episode of their podcast, a festive special, last December.

Guests were a mixture of celebrities such as Elton John and a number of activists.

Meghan and Harry have also signed a mega-deal with streaming giant Netflix.

The couple will produce films, documentaries and children’s shows for the streaming giant.

Shortly after Meghan’s pregnancy announcement a photograph of the Sussexes’ was posted on Twitter by long-time friend Misan Harriman.

In the black-and-white image, Meghan rests her head on Harry’s lap with one arm over her clearly pregnant belly.

Accompanying the photo Mr Harriman wrote: “Meg, I was there at your wedding to witness this love story begin, and my friend, I am honoured to capture it grow.