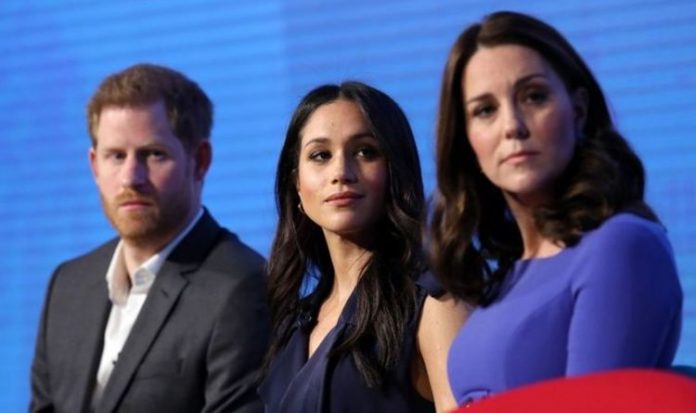 The Duke and Duchess of Cambridge spoke out in support of football star Marcus Rashford MBE, after the Manchester United player was subject to racial abuse online. But Meghan Markle fans have questioned the couple’s motives, as they claimed Kate and William did not call out racism when the Duchess of Sussex was the target.

Kristen Meinzer, a podcast host and author, replied to the Cambridge’s: “I do wish you and your family were this vocally antiracist when the target of the racism was the Duchess of Sussex, #MeghanMarkle.”

Author Ashely Theophane said: “Shame you didn’t have the same energy when Meghan was getting abuse.”

Other Twitter users made similar comments, with one person writing: “If only you cared about the abuse directed at Meghan Markle.”

A third wrote: “Yet you didn’t stand up for your sister in law. That is sad.”

Another user said: “Where was this plea when MM was being harassed….

One person fumed: “Meghan and Archie probably wish you’d spoken up for them.”

Kate and William called for a social media crackdown on racist abuse this evening.

Manchester United forward Rashford said he was subjected to “humanity and social media at its worst” after receiving racist abuse.

The 22-year-old was bombarded with a string of racist messages on Instagram after his team’s 0-0 draw with Arsenal yesterday.

When the Duke first started dating Meghan, a former US actress, in 2016 he released a statement condemning the “racist overtones” in the reporting of their relationship.

The statement read: “But the past week has seen a line crossed. His girlfriend, Meghan Markle, has been subject to a wave of abuse and harassment.

“Some of this has been very public – the smear on the front page of a national newspaper; the racial undertones of comment pieces; and the outright sexism and racism of social media trolls and web article comments.”

It continued: “Prince Harry is worried about Ms. Markle’s safety and is deeply disappointed that he has not been able to protect her.

“It is not right that a few months into a relationship with him that Ms. Markle should be subjected to such a storm.

“He knows commentators will say this is ‘the price she has to pay’ and that ‘this is all part of the game’. He strongly disagrees. This is not a game – it is her life and his.”