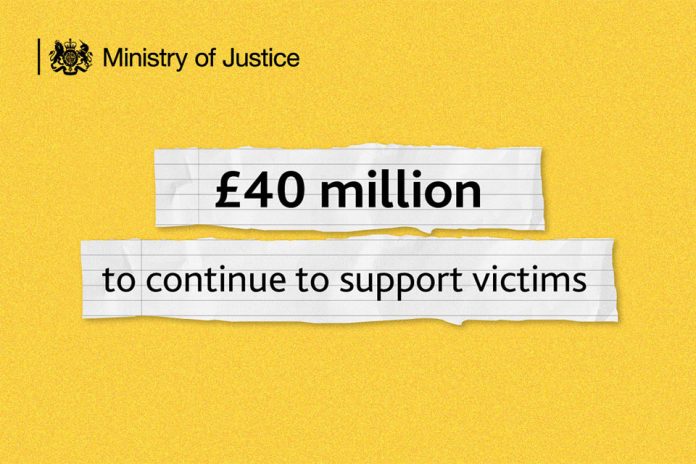 It comes as charities have reported a 200% increase in calls and people accessing webchat services since the first lockdown, with some victims feeling at greater risk of harm or deciding to report abuse for the first time.

The new investment will allow support organisations to recruit more staff, keep helplines open for longer and adapt to remote counselling where necessary – ensuring help remains available for those who need it.

Crucially, £16m will fund the recruitment of more independent sexual violence and domestic abuse advisers across the country. They provide emotional and practical support for victims, while guiding them through the criminal justice process which many can find daunting.

A new government advertising campaign, #ItStillMatters, also launched today seeks to raise awareness of sexual violence services and ensure victims of rape and sexual abuse know where to get help – encouraging them to take the often difficult step of seeking support for the first time.

The funding also builds on an unprecedented £76 million pledged by Ministers in May to help the most vulnerable in society during the pandemic, as well as an extra £125 million for local authorities to provide support in safe accommodation for victims of domestic abuse and their children.

For many victims this pandemic has been an inescapable nightmare in which they often feel trapped and at greater risk of harm.

Their protection remains an absolute priority and this funding, backed by our new campaign, should mean no victim is left to suffer alone.

A sexual violence victim who worked with the charity SafeLine and wished to remain anonymous, explained the important role her Independent Sexual Violence Adviser played for her:

I honestly could not have gotten through this whole process without my ISVA, she just got me. She understood what I was going through and she knew how I needed to be told things and handled.

I remember her telling me to keep breathing and when I was in court, I could hear her breathing too and it reminded me that I was not alone. My ISVA never compromised on their aim to put me first. I would trust her with my life and I think if anyone is going through something similar, then they won’t go far wrong in getting the support required.

A male victim who also wished to remain anonymous and is supported by Breaking the Silence, said:

It was only after I could no longer bear the flashbacks that I finally decided to seek help. My initial fears and qualms about getting support were carefully managed, and I was eased into it. Although therapy brought out feelings of anger and hurt, the pain associated with the trauma gradually started to recede.

I met other men who had been through similar experiences, they helped me through my sense of isolation as I realised I wasn’t the only victim in my community. There were many challenges to overcome and I continue to receive support, but I’m now in a new relationship and the flashbacks have been eradicated almost entirely.

Sexual violence can devastate lives and it is important that people are aware that if they or somebody they know is suffering from this, they can leave their home to access support services.

We have invested millions to make sure vital services including helplines remain available to victims and if anyone is in immediate danger they should call 999.

We also want to hear from the public about violence against women and girls and have recently launched a national survey about these crimes. I want to encourage anyone with views on this topic to take part. Their voices need to be heard.

The pandemic and associated lockdowns have impacted all of us. It has been particularly difficult for victims of sexual violence and domestic abuse who struggle to access support. This important campaign by government will raise awareness amongst victims and survivors that they are not alone, that taking that first step of reaching out for support is possible.

NAPAC is delighted that the government has backed up this campaign with £40m of new funding for victim services, £16m of which is specifically for sexual violence support services. This will aid the sector immeasurably in our work to support victims and survivors.

Neil Henderson, Chair and co-founder of the Male Survivors Partnership

The Male Survivors Partnership applauds the government for providing much-needed, additional funding for specialist services who support victims of sexual violence and domestic abuse. For those men, women and children living with the impacts of sexual and domestic violence, the impact of COVID has been devastating and will be long-lasting; this timely increase in funding will enable all specialist agencies to better respond to the needs of victims and survivors.

We also welcome and fully support the launch of a Government sexual violence awareness campaign aimed at helping more victims and survivors access critical support. High-quality, specialist support is available for men, women and children affected by sexual violence throughout England and Wales, but many victims and survivors don’t know how to access it. This campaign will hopefully change that and help enable more people to access the support they need to cope and recover from the abuse.

As the extremely challenging conditions of the last ten months have exacerbated isolation, anxiety and complex physical, mental and emotional health issues for sexual violence and abuse victims and survivors, we’ve inevitably seen demand for our specialist services increase even further.

This new contribution towards our ongoing efforts to fulfil victims’ and survivors’ unmet needs is vital and very gratefully received, as is the Government’s recognition of our frontline work as essential.

We’re pleased too that the Government’s new campaign will echo and amplify our consistent message to those living with the impacts of all forms of sexual violence and abuse: you are not alone, we are still here for you.

The #ItStillMatters campaign includes a range of advertisements to raise awareness of the support that is available to victims of sexual violence. This follows the launch of ’Ask for Ani’ – a domestic abuse codeword scheme to help victims access support in thousands of pharmacies nationwide.  Through a discreet signal victims will be able to access emergency police response, help contacting a domestic abuse helpline or specialist support services.

Meanwhile, the courts continue to prioritise the most serious offences to keep the public safe, with the Government investing £110m on a range of emergency measures to keep the justice system moving, including by opening  39 Nightingale Court rooms across the country.

The Home Office is also asking the public to share their views on violence against women and girls in a Call for Evidence that will inform the Government’s upcoming strategy to tackle these crimes.