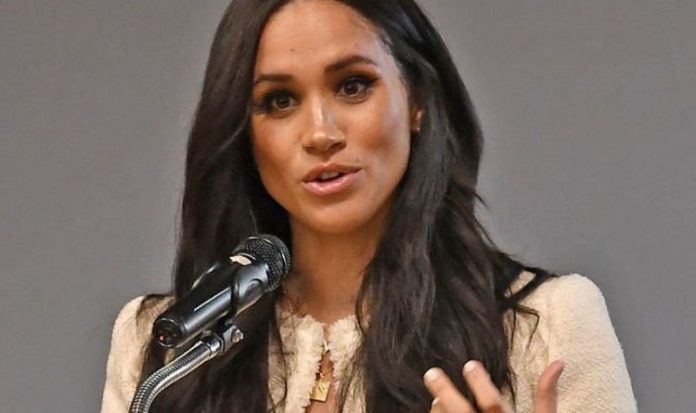 Meghan Markle is following in the footsteps of US celebrities who have decided to embark on a political career, such as Arnold Schwarzenegger, a prominent Democratic strategist has claimed. Mike Trujillo said the Duchess is “definitely putting her toe in the water” and predicted it won’t be long until she decided to fully enter the political arena.

He told the Times: “She’s doing everything that’s appropriate and allowed given her new position but she’s definitely putting her toe in the water.

Mr Trujillo believed Meghan and Harry’s foundation, which they are yet to officially launch, is also a stepping stone into politics.

The couple will focus on causes such as mental health services, social media and racial equality.

Mr Trujillo said: “Everything she’s doing is similar to what other folks have done before they run for office.

“He used that as a vehicle to talk about the need for tutoring and after school care.

He said: “California is one of those states that welcomes fresh perspectives.

“It wouldn’t surprise me to see Prince Harry getting more involved.”

But one source believed Meghan was not concerned with entering politics at the moment, and was instead focusing on “making money”.

They told the newspaper: “I don’t really think she has political ambitions now. But her ego knows no bounds, so maybe she is keeping the door open.

“But she cannot right now, because they are very focused on making money.

“Running for public office and making a fortune don’t go together.”

Since stepping down as a senior member of the Royal Family, Meghan has started to become more open about political matters.

Ahead of the US Presidential election she urged Americans to vote, branding the election as the “most important election of our lifetime”.

It also emerged the Duke and Duchess of Sussex chatted to Gavin Newsom, the governor of California, ahead of the US election.

The hour-long zoom chat was a social call, according to a source close to the Sussexes.