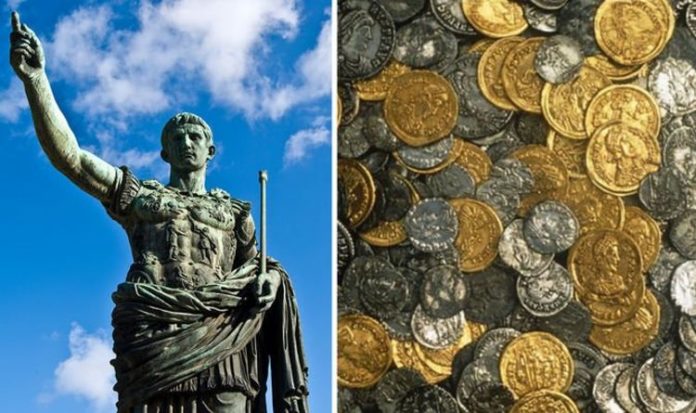 Eric Lawes’ life was turned upside down when he made the incredible discovery in a Suffolk field. His metal detector – a gift he’d received when he retired – was meant to find a hammer lost on the farmland, but instead, it picked up a strong signal coming from beneath the surface. Soon it became clear to Mr Lawes that he had found treasure. But just how monumental his find was would soon unravel.

After excavating only a few silver spoons and gold coins, Mr Lawes called the police and then the local archaeological society.

The next day, a huge chunk of the earth was removed with the treasure held within. This allowed experts to study it under lab conditions.

After a meticulous process, they documented 27kg of gold and silver objects, including 15,234 Roman coins, dozens of silver spoons and 200 gold objects in what has become known as the Hoxne Hoard.

Mr Lawes received £1.75million (£3.7million today) from the Government in 1992 for finding the gold and leaving it intact and his hammer was also found.

The coins dated back to the Roman Empire (Image: GETTY)

Display case reconstructing the arrangement of the hoard treasure when excavated (Image: WIKI)

And he was not the only one thrilled.

University of Leicester’s Rachel Wilkinson said it was “the largest ever found in Britain” from the Roman Empire and it helped them learn more about a turbulent period in history.

But, almost three decades on, the discovery threw up a curveball.

Radiocarbon could not be used as a dating technique for the hoard as no organic material survived, so archaeologists used the age of coins, determined by their inscriptions as well as the ruler depicted on its face.

But, Roman archaeologist Dr Peter Guest suggested that his peers may have been wrong with their estimations of when the treasure was buried.

The treasure was discovered in 1992 (Image: BRITISH MUSEUM)

He told Smithsonian Magazine: “The date after which Hoxne must’ve been buried is 408 or 409 [based on the age of the coins] and the traditional model would suggest it was buried around about that point in time.

“My perspective is that, actually, we’ve been misdating these hoards.

“If you look at them a little more carefully, then they should be dated to the period after the separation of Britain from the Roman Empire.”

Roman Britain was the period in history when large parts of the island were under occupation by the Roman Empire from 43AD to 410AD.

But for much of the later period of the Roman occupation, Britain was subject to barbarian invasions and often came under the control of imperial usurpers.

The final Roman withdrawal from Britain occurred around 410AD and the native kingdoms are considered to have formed sub-Roman Britain after that.

And Dr Guest believed this shows our Romano-British ancestors were so terrified of being raided that they buried their most valuable belongings.

He added in 2018: “The years from the later fourth century to 450AD, the period including the British hoarding peak, witnessed numerous invasions into the [mainland Europe] Empire by Germanic and Hunnic groups often followed by large-scale devastation and disruption.”

Dr Guest argued the coins may have been in circulation around Britain for decades after the Roman Empire removed its influence from the island.

One bit of evidence he tabled for this hypothesis is a practice called clipping.

Almost all of the 15,000 coins found had bits of their edges removed, reducing their size by as much as a third.

The coins provide an insight into the true date of the dig (Image: WIKI)

Based on modern chemical analyses, Dr Guest and others have found that the metal removed from those coins was used to make imitation Roman coins that remained in circulation for longer.

He continued: “The Roman Emperor wasn’t supplying Britain with new gold and silver coins, and in light of that, the population tried to get over this sudden cutoff in the supply of precious metals by making the existing supplies go further.”

Dr Guest admitted there is not enough definitive evidence yet, adding he cannot “prove or disprove” the theory.