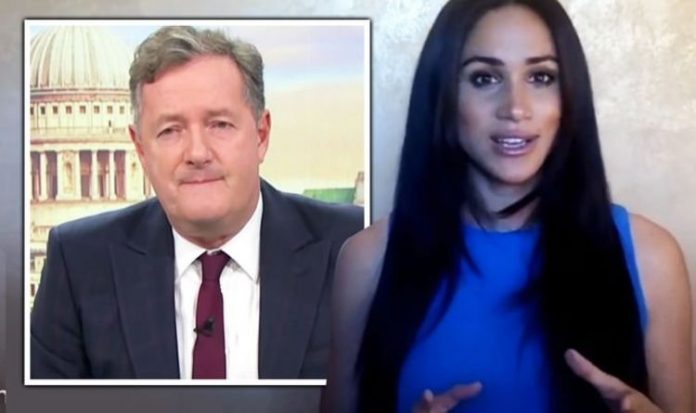 Meghan Markle has been the subject of furious criticism from Piers Morgan over the past few years and a celebrity biographer has highlighted a hilarious fact about the journalist. In an exclusive interview with Express.co.uk Sean Smith pointed out Mr Morgan is actually “a Sussex man”.

When discussing the GMB presenter’s constant criticism of Meghan, Mr Smith told this website: “I do think it is funny though that he is a Sussex man and she’s the Duchess of Sussex.”

The biographer goes into further detail on the matter in his new book, Meghan Misunderstood.

He said: “One of the more amusing things about Piers’s continued criticism of Meghan is that he is a Sussex boy.

“Though born in Ireland, he was brought up in Newark, East Sussex, and now owns a splendid mansion in the area, complete with swimming pool.

“So Meghan is his Duchess.”

Meghan and husband Prince Harry are still officially known as the Duke and Duchess of Sussex, despite stepping down as senior royals earlier this year.

The decision to keep their official titles has been highly controversial, with many commentators calling for the pair to lose their titles for good.

“It seems to me they want to have their royal cake and eat it.

“They want to have all the commercial buyer power of being the Duke and Duchess of Sussex without any need to do any of the dirty little jobs on a wet Wednesday in Stoke when they have to visit an old people’s home or something.

“And I think that’s not on their agenda.

“They want to be in Hollywood drinking tea with George Clooney so I think you can’t have it all.

“If you want to go off and be celebrities like the Kardashians then drop the royal titles.”

However, Mr Smith has said he does not think Meghan and Harry will ever lose their Sussex titles.