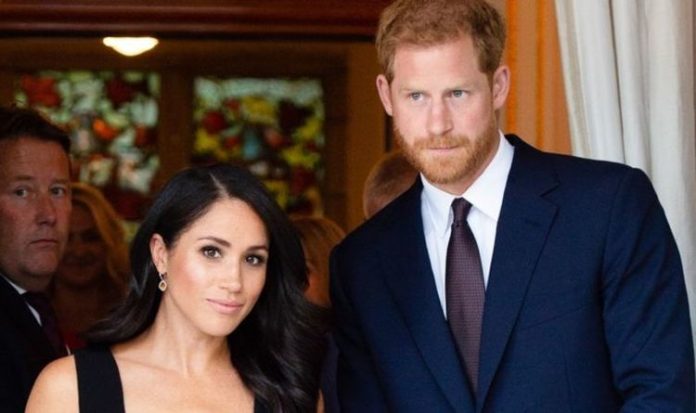 Charles Spencer appeared on ITV’s Lorraine this morning, just hours after an article penned by Meghan about the loss of her child was published by a US newspaper. During an interview with host Lorraine Kelly, the Earl sent his well wishes to his nephew and wife in the wake of the tragic news.

Lorraine said: “I am sure you will want to join us, all of us here, in wishing all our love to Meghan.

“And of course, to your nephew Harry because today we just found out the news she had a miscarriage. It is just terribly sad, isn’t it?”

Earl Spencer replied saying: “I can’t imagine the agony for any couple of losing a child in this way. It’s so very, very sad.

“And of course, I totally agree with you, all thoughts with them today.”

Meghan Markle opened up on the tragedy of losing a child in an article she penned for a US newspaper (Image: GETTY)

In her article, Meghan recalled how a tranquil morning of July turned into a deeply personal tragedy when she realised she was losing her second child just seconds after having changed her son Archie’s nappy.

She wrote in the New York Times: “After changing his diaper, I felt a sharp cramp.

Meghan Markle has been praised for bravely speaking about her miscarriage (Image: GETTY)

The Duchess of Sussex eloquently described the pain both she and Prince Harry experienced in the aftermath of this loss, and how so many other people had gone through the same.

She said: “Losing a child means carrying an almost unbearable grief, experienced by many but talked about by few.

“In the pain of our loss, my husband and I discovered that in a room of 100 women, 10 to 20 of them will have suffered from miscarriage.

“We have learned that when people ask how any of us are doing, and when they really listen to the answer, with an open heart and mind, the load of grief often becomes lighter — for all of us.

“In being invited to share our pain, together we take the first steps toward healing.”

Charities focused on helping people who had miscarriages as well as many of those who lost a child came together to praise Meghan for helping break the silence and the taboo surrounding this heartbreaking topic.

Sophie King, a midwife from Tommy’s, said the Duchess’s article sent a “powerful message” to others who have experienced the loss of a baby.

She said: “Meghan’s essay praises the bravery of parents who share their stories, and those who prefer to grieve privately can still find comfort and connection in reading about others’ experiences.

“Her honesty and openness today send a powerful message to anyone who loses a baby: this may feel incredibly lonely, but you are not alone.

“Friends and family, doctors and midwives, all of us at support organisations like Tommy’s; we’re here.”

Sands, a charity supporting anyone affected by the death of a baby and improve bereavement care, wrote on Twitter: “The Duchess of Sussex, Meghan Markle, has shared she had a miscarriage in July.

“‘Losing a child means carrying an almost unbearable grief, experienced by many but talked about by few.’

“We want everyone affected by #babyloss to know you are not alone”.

Britain’s Miscarriage Association wrote on Twitter: “We’re so very sorry to hear of the Duchess and Duke of Sussex’s miscarriage.

“The Duchess of Sussex, Meghan Markle, has shared their story in the New York Times.

“She writes about how important it is for us all to reach out and ask others, ‘Are you OK?’.”