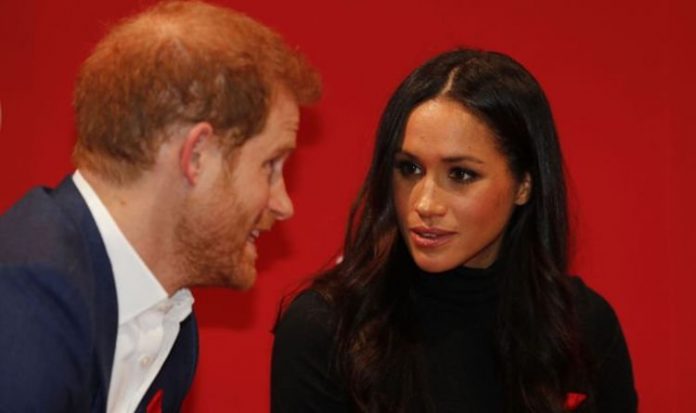 The new tell-all biography, written by Omid Scobie and Carolyn Durand, was released this month. It told a controversial version of events leading to Meghan and Prince Harry’s step back from the Royal Family on March 31.

Fans of the Sussex royals have flooded the page for the book with positive reviews to boost its scores on the website.

Due to the campaign, Amazon has been forced to limit reviews of Finding Freedom to “verified purchases only”.

A message on the retail site said: “Amazon has noticed unusual reviewing activity on this product.

“Due to this activity, we have limited this product to verified purchase reviews.”

Accounts dedicated to Meghan and Harry are believed to have coordinated campaigns to swarm the site with five star ratings.

One Twitter user said: “There is an organised effort to leave bad reviews for Finding Freedom on Amazon and to mark hateful reviews as “helpful” so they appear first.”

Another account added: “#SussexSquad, the trolls are upvoting all the negative reviews on Amazon by rating them as helpful (some are rated helpful by at least 400 people).”

“If you have time, please go rate the positive reviews.”

Meghan and Harry have distanced themselves from Finding Freedom, with a spokesman for the couple claimed they did not contribute to the book.

The controversial tell-all has been the subject of scepticism from royal experts, who believe it presents a one-sided view of the Sussexes departure from Royal Family duties.

Richard Kay commented: “The fact they have said nothing – beyond the routine denial that they had not been interviewed for the book – leaves readers to make up their own minds.

“Because for a couple so obsessive about their privacy, the book is all the more remarkable because it is, from start to finish, an extraordinary invasion of their own privacy.”

Finding Freedom was released on August 11, and within one day shot to the top of Amazon’s bestselling books list.

Mr Scobie took to Twitter to express his gratitude for the books success.

He said: “Immense gratitude to all who have been part of the incredible support for Finding Freedom.”

Despite the Sussexes claims they were not involved, a note from the authors in the book said:” We have spoken with close friends of Harry and Meghan, royal aides and palace staff (past and present), the charities and organisations they have built long-lasting relationships with and, when appropriate, the couple themselves.”