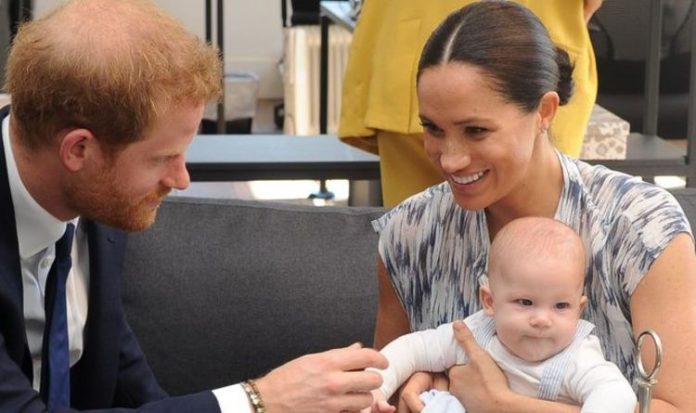 The tot has been poking his head into his parents’ Zoom meetings at the family’s new Santa Barbara home in California. Archie’s antics were revealed by royal biographer and co-author of Finding Freedom, Omid Scobie. The man behind the bombshell book detailing the Duke and Duchess of Sussex’s lead up to Megxit spoke about seeing the toddler in recent video calls with the couple.

During an episode of his podcast, The Heir Pod, Mr Scobie opened up about his contact with the royal couple during lockdown.

He said: “I loved discovering their daily Zoom calls with the various initiatives and people that they work with.

“And how Archie is no stranger to climbing in front of the web camera and making little impromptu cameos.”

One person said the revelation shows the Duchess is not “immune to her toddler interrupting online work meetings”, adding: “You’re not alone, working-from-home parents!”

The fan said they found it “so adorable” that little Archie seemed interested in his mother and father’s online meetings.

A second person said they loved the way the child is now known for “butting in” on his parents’ important calls.

And a third called for Archie to “bomb into” their next Zoom call.

The firm will operate separately from their charitable organisation, Archewell.

Netflix CEO Reed Hastings said: “The real focus for them is on being producers and on building a production capacity, so that’s the key thing.”

He said the Queen’s grandson and his American-born wife know the key components of what makes a good story.

He continued: “They’ve developed a great eye for story, and we’ll be working with them on that basis.

“They’re smart—they were shopping it around across all of the major companies.

“And I think we really put together the best complete package.”

Harry and Meghan have paid back the £2.4 million of taxpayers’ cash they used to renovate Frogmore Cottage.

A spokesman for the duke confirmed the bill had been paid by a contribution made to the Sovereign Grant.

The money was used to convert five small staff cottages into a large family home in the run up to Archie’s birth in May 2019.