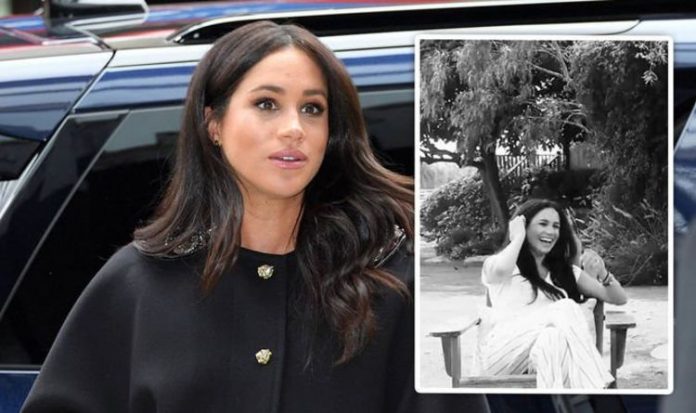 Meghan joined feminist Gloria Steinem in a conversation focused on the importance of voting in the upcoming US election as well as feminism. While the Duchess of Sussex has been publicly speaking for weeks about exercising the democratic right to vote, one royal fan believes that during her latest public conversation, the Duchess let her neutrality slip and indicated who she may vote for in the election.

Royal watcher Gert’s Royals wrote on Twitter: “They talk about women’s rights, the need for representation and voting ahead of the US Presidential Election in November.

“In Duchess Meghan’s recent work on voting and the representation of women, she has tried very hard to stay non-partisan.

“She has been speaking only with non-partisan organisations and not explicitly mentioning any specific candidate or party.

“But today’s interview does start to step over the line the non-partisan line as Gloria brings up the Democratic Party, the Vice President Candidate Kamala Harris.

Meghan Markle took part in a conversation with Gloria Steinem (Image: GETTY/DUKE AND DUCHESS OF SUSSEX)

“She was on Biden’s shortlist for Vice President and one of 17 keynote speakers at the Democratic National Convention.”

During their chat, Ms Steinem and Meghan discussed the nomination of Ms Harris as Joe Biden’s running mate.

Ms Steinem said: “Really, we’ve been rescued by women of colour in all of our recent elections because of a vote of conscience and compassion.

“The heart of the Democratic party has been black women, actually, and now there is a potential Vice President who is black and that’s exciting.”

The Duchess replied: “I’m so excited to see that kind of representation.

Meghan Markle taking part in the summit organised by The 19th* (Image: THE 19th*)

Meghan Markle said she was glad to have returned to the US (Image: GETTY)

“You know, for me, being biracial, growing up, whether it was a doll or a person in office, you need to see someone who looks like you in some capacity.

“As many of us believe, you can only be what you can see.

“And in the absence of that, how can you aspire to something greater than what you see in your own world?

“I think maybe now we’re starting to break-through in a different way.”

The royal watcher’s opinion was opposed by another royal fan who believes Meghan was simply expressing her happiness at seeing more women of colour in politics.

Stating he doesn’t think Meghan had given any indication she would back the Democratic Party in November, Twitter user Jordon-Lee wrote: “The Duchess of Sussex is saying she’s excited by the prospect of having a female and black Vice President.

“She doesn’t talk parties or supporting. It’s all about representation”.

In her conversation with Ms Steinem, which has been transcribed and published on Yahoo Live in an article written by Meghan, the Duchess also speaks about the reasons why she is happy to have returned to the US after having lived for almost a decade abroad.

She said: “We’ve talked a lot these last few weeks.

“I keep thinking my goodness — I’ve looked up to you for so long!

“It’s wonderful to just be in your company, to learn so much and to feel inspired to be home.

“But also to help people remember why it’s so important to vote.”

Meghan had already spoken about the importance of voting in her two previous solo engagements.

Taking part in the virtual summit hosted by non-for-profit news organisation The 19th*, Meghan said: “When I have these conversations about encouraging people to go out and vote, I think it’s often challenging for men and women alike certainly for people to remember just how hard to was for people to get the right to vote.

“And to be really aware of not taking that for granted.”

Meghan also recently participated in the When All Women Vote event organised by a campaigning group urging people to register to vote.