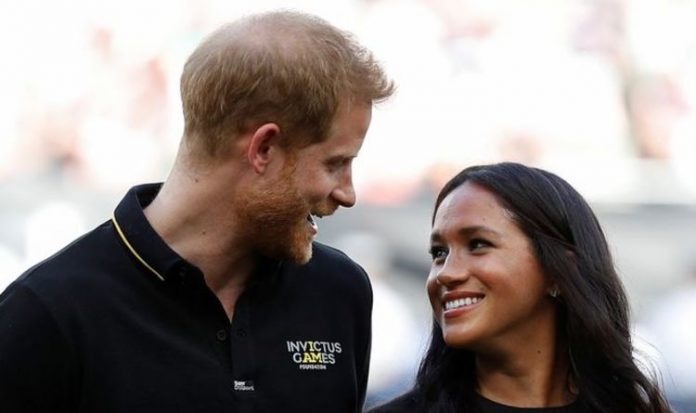 The Duke and the Duchess of Sussex have put together an eclectic lineup of personalities for their podcast as they looked back on 2020. The holiday special also features their son Archie Harrison, who was heard speaking publicly for the first time.

According to the couple, their podcast’s first episode was meant to “uplift and entertain audiences around the world”.

One of the highlights of the podcast was the appearance of Sir Elton John, who was also good friends with Harry’s mother, Princess Diana.

The singer stayed in touch with the Duke after his mother’s death in 1997 and worked with him on AIDS charity campaigns.

In his audio diary for couple’s first podcast on Spotfiy, Sir Elton said: “Well, we were in the middle of a tour and then Covid started and we came back to England in May, and it was very strange because we were going full pelt, and then all of a sudden we ground to a halt.

“I’m 73 years old, and I’m a semi diabetic, so I’m in a risky area there, I have an underlying condition as they say. I’ve seen my immediate family – Zachary, Elijah and David – all the time.

“But my relatives, who I love, haven’t been able to see much of them at all, and I’ve only stayed connected with him by phone, of course, and by Zoom.”

Other guests on the highly-anticipated show included Christina Adane, 17, a young activist who has co-chaired a campaign against food injustice.

The South London teenager also started one of the most successful petitions in recent UK political history.

Indian-American author Deepak Chopra, who defines himself as an “explorer of consciousness,” also made an appearance on the show.

Mr Chopra’s work had been previously cited in Meghan’s lifestyle blog The Tig, which she authored before marrying Prince Harry.

The episode description on Spotify for the 34 minute podcast reads: “As we come to the end of the year, Prince Harry, The Duke of Sussex, and Meghan, The Duchess of Sussex, present a special collection of inspiration, reflection, and perspective from guests around the world, including: Stacey Abrams, Christina Adane, José Andrés, Brené Brown, Rachel Cargle, Deepak Chopra, James Corden, Matt Haig, Sir Elton John, Hussain Manawer, Naomi Osaka, Tyler Perry, and George the Poet (plus a surprise or two).

“Curated throughout the month of December, join them as they reflect on the year, speak openly about the power of compassion, and toast to a hopeful 2021.”

DON’T MISS:
Prince Philip ‘doesn’t want fuss made’ for 100th birthday as Duke nears milestone age [INSIGHT]
Kate and William set for key roles in 2021 as Meghan and Harry stay in the US [ANALYSIS]
Prince Charles on BBC Radio 4: How to listen to Prince [INFO]

The podcast began with the Duke and the Duchess paying tribute to frontline workers for their “sacrifices” during the coronavirus pandemic.

They also acknowledged those who had experienced “uncertainty and unthinkable loss” during the health crisis.

“We really want to honour the compassion and kindness that has helped so many people get through it.”

The Duchess added: “And at the same time, to honour those who have experienced uncertainty and unthinkable loss. Our thoughts have been with you, especially during this holiday season.”

Harry continued: “And in too many instances people weren’t able to be at a loved one’s side or say goodbye as they would have wished.”

Meghan said: “We also want to thank healthcare workers, frontline service workers, and so many others for their sacrifices.”

The Duchess explained she and Harry had asked people who “inspire us” to give “their thoughts on what they learned from 2020”.