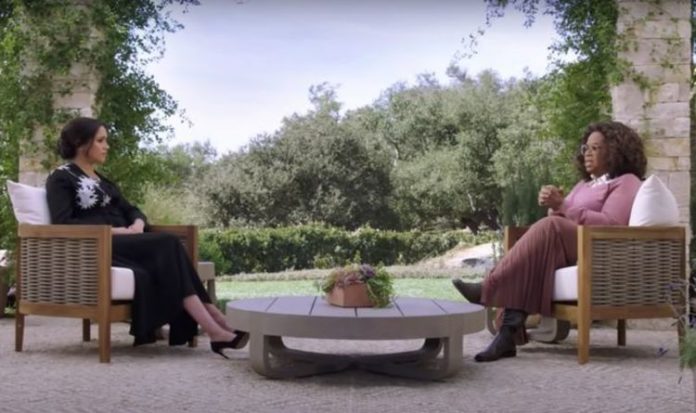 Two teaser clips for the bombshell interview were released yesterday, sending royal fans into frenzy and sparking speculation. Initial rumours claimed the Duke and the Duchess of Sussex had been filmed in the garden of their $14.5 million Montecito mansion.

However, journalist Gayle King, who is friends with host Oprah, rebuked previous speculation about the location.

The TV mogul said the interview, which is due to air next Monday on CBS, was filmed in the grounds of a friend’s property.

She told the Daily Mail: “They taped at a friend’s home.

“People said it was at Oprah’s house or Harry and Meghan’s, [but] it was at a friend’s home.”

Ms Gayle did not give further details or say who the friend in question was.

In one of the sneak peeks, Prince Harry spoke of his fear of history repeating itself in terms of the treatment shown to his wife and mother, Princess Diana.

Diana died in 1997 in a car crash in Paris, something the Duke made reference to in the clip.

In the footage the Duke said: “I can’t begin to imagine what it must have been like for her going through this process by herself all those years ago, because it has been unbelievably tough for the two of us – but at least we had each other.