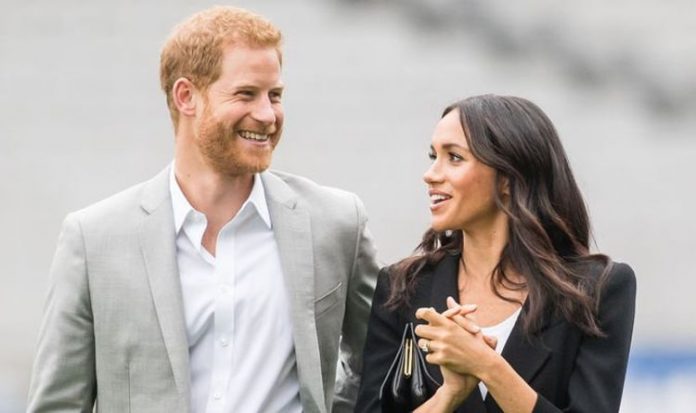 Meghan and Harry have submitted papers to the US Patent and Trademark Office to protect their Archewell Audio brand in a number of areas. It follows the announcement they will produce a podcast series for online media giant Spotify.

Just days after this became public the couple sought protection for Archewell Audio and their Archewell charity, to prevent anyone else profiting from the names.

The papers are currently with US copyright attorneys who will need to study the submission.

In September Meghan and Harry also announced a mega deal to produce shows for Netflix.

The couple will make films, documentaries and children’s shows for the streaming service.

According to the papers submitted by Meghan and Harry would give them protection to produce a wide range of media under the Archewell label.

These include “general feature magazines and printed periodicals” as well as “fiction and non-fiction books on a variety of topics”.

The couple also listed audiobooks, CDs and live stage performances on their application.

Details of the subjects likely to be addressed by Archewell Audio productions were also revealed in the official document.

Meghan and Harry are to host a podcast series on Spotify (Image: GETTY)

Harry and Meghan shocked the world in January when they announced their intention to step down as senior royals.

The couple completed their final engagement as working Royal Family members at the end of March before leaving for North America.

They are currently living in a £11.2m mansion situated to the north of Los Angeles.

Meghan and Harry announced they were standing down as senior Royals in January (Image: GETTY)

The Duke and Duchess of Sussex have signed a deal with Netflix (Image: GETTY)

As part of their announcement the Duke and Duchess said they would aim to become “financially independent”.

The news Meghan and Harry could launch a magazine could raise concern within the wider Royal Family with insiders claiming there is already disquiet about the couple’s political interventions and commercial interests.

Harry and Meghan’s Netflix deal came under renewed scrutiny following the release of season 5 of The Crown, a hit Netflix show.

Critics have accused the season of historical inaccuracies, and in particular of misrepresenting the relationship between Prince Charles and Princess Diana.

Charles Spencer, brother to the late Princess, has suggested each episode should begin with a message warning viewers some of the content is fictional.

Meghan and Harry with their son Archie (Image: GETTY)

When the Netflix deal was announced Ted Sarandos, the company’s chief executive, commented: “Harry and Meghan have inspired millions of people all around the world with their authenticity, optimism and leadership.

“We’re incredibly proud they have chosen Netflix as their creative home – and are excited about telling stories with them that can help build resilience and increase understanding for audiences everywhere.”

The first episode of Meghan and Harry’s Spotify podcast, a festive special, is expected to be released later this month.