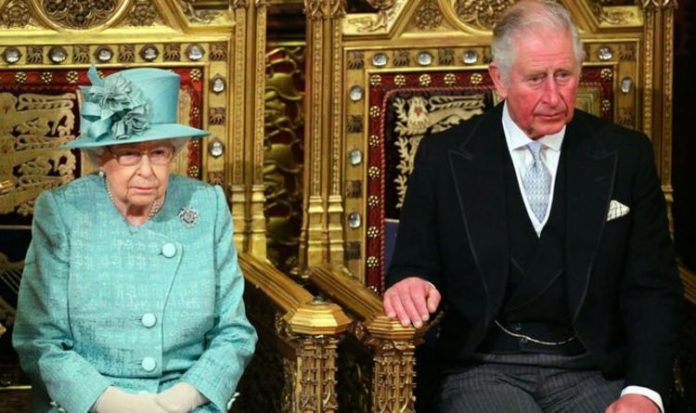 The Prince of Wales is next-in-line for the throne and is understood to be in favour of a “slimmed-down” monarchy with only immediate family members granted royal privileges. The Royal Family gave their clearest indication that they were in favour of downsizing when they released their official Christmas photos in 2019.

In one festive portrait, the Queen appeared alongside the three heirs to the throne – Charles, Prince William and Prince George.

Prince Harry, his son Archie, Prince Andrew and his daughters Princess Beatrice and Princess Eugenie were nowhere to be seen.

But, according to royal commentator Richard Fitzwilliams, Prince Charles could be forced to halt his plans due to the lack of working royals.

Prince Phillip, 99, has retired from official duties and the Queen, 94, has scaled down her number of appearances.

The Queen no longer travels on overseas tours and has already handed over a number patronages to Charles.

Meghan Markle and Prince Harry left their senior roles within the Royal Family at the end of March and are set to stay in the US for the immediate future.

Last November, Prince Andrew stepped away from royal duties amid a backlash over his association with convicted sex offender Jeffrey Epstein.

His daughters Beatrice and Eugenie are not working members of the Royal Family and have forged their own personal careers.

Meanwhile, the children of Kate and William are still far too young, Prince George is only aged seven, Princess Charlotte, five and Prince Louis, two.

Speaking to Express.co.uk, Mr Fitzwilliams pointed out the royals support more than 3,000 organisations and this involves more than 2,000 engagements each year.

Most recently, Prince Edward, 56, and his wife Sophie, the Countess of Wessex, 55, have featured more prominently in frontline royals.

Mr Fitzwilliams says the age of the members of the Royal Family should be “borne in mind” when Charles thinks about his future plans.

He said: “Clearly the number of working royals, with Andrew stepping down as well as the Sussexes, is fewer.

“It may well be that when Charles ascends the throne and before George, Charlotte and Louis are able to begin engagements, there will be too few royals to carry these out at the current level.

“Since royal links have such a cachet, they are currently attached to some 3,000 organisations and over 2,000 engagements are carried out each year, this should be borne in mind when there is talk of a ‘slimmed down monarchy’.

“This has already happened, but these links are truly valuable.”

Royal author Robert Lacey has previously claimed the now infamous Christmas photograph of the Queen, Charles, William and George was the “idea” of the Prince of Wales and insisted he was “anxious to promote” his plans for downsizing.

Speaking earlier this year, Mr Lacey said: “What a fascinating and historic image to remind us of the essence of the royal system.

“The current monarch with three future monarchs. All the living heirs — and not a suggestion of a spare.

“According to insiders, this formal photograph, taken in the Buckingham Palace Throne Room a week before Christmas 2019, was the idea of Prince Charles, anxious to promote his cause of the ‘slimmed-down’ monarchy.”