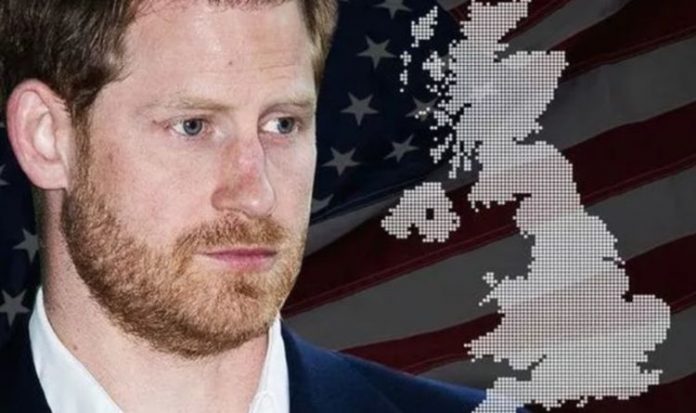 Prince Harry is currently the only member of his family not to hold US citizenship as both Meghan Markle and their son Archie are. The Duke of Sussex may someday decide to apply for citizenship himself as the married partner of a US-passport holder but he has been warned it will take him years before getting the new document. Royal expert Marlene Koenig told Express.co.uk earlier this year: “It would be a process, that would be a big decision for Harry.

“He wouldn’t even be able to vote in the election four years from now.

“It’s a long process, at least five years, if not longer.”

Ms Koenig made the comments as she discussed the possibility of Prince Harry choosing to renounce his British titles as part of his plans for independence from the British Royal Family.

The Duke and Duchess of Sussex announced in January they would take a step back from their royal careers to seek financial and decisional independence on the causes to support.

The move sparked a debate on whether Harry and Meghan should be allowed to hold on to their titles despite no longer working on behalf of the Queen.

Her Majesty has granted the couple permission to keep their HRH style but the Duke and Duchess had to agree they would not be used in a business capacity.

Ms Koenig however suggested applying for US citizenship may automatically result in Prince Harry, and consequently Meghan Markle, losing their titles.

She continued: “He would literally have to, even though there is no law preventing him from still being called Prince Harry, but when you become a US citizen, you have to renounce any titles or allegiance.

Princess Patricia, a granddaughter to Queen Victoria, chose to relinquish her titles when she tied the knot with naval officer Alexander Ramsay in 1919.

Ms Koenig added: “She, being very shy and not having a public role, decided that, because her husband was a mere Honourable, and there was no discussion of him in 1919 getting his own peerage, she chose to be styled not as a princess. She relinquished, did not renounce.”

“So George V, her cousin, issued a letters patent that stated that she was relinquishing the use of the Royal Highness style and the title of princess.

“She would be styled as The Lady Patricia Ramsay with precedence before the marchionesses of England. She didn’t stop being a princess, in fact, in the 1937 and 1953 coronations, she wore the coronet in the role of a princess. She just wasn’t styled.

“So there is an opportunity that Harry could do a Princess Patricia and choose to be styled as the younger son of a Duke because he is. His father is the Duke of Cornwall and the Duke of Rothesay.”