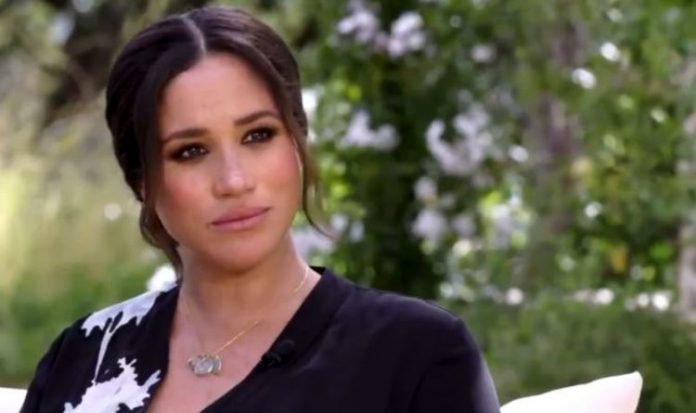 In the trailer for Oprah Winfrey’s interview of Meghan and Prince Harry, the duchess donned a £3,300 black Armani number with a lotus flower across her chest. The pregnant royal may have used the outfit to convey a coded message to viewers about her journey out of the Royal Family.

According to Town and Country magazine, Meghan, 39, specifically chose a dress with a lotus flower, which is a symbol of rebirth and self-regeneration.

The lotus flower characterises an inspiring analogy for the human condition – that it grows in the dirtiest waters to produce the most stunning leaves and colourful petals.

Editor Katie Robinsons said: “With its roots latched in mud, it submerges every night into river water and miraculously re-blooms the next morning, sparklingly clean.

In many cultures, this process associates the flower with rebirth and spiritual enlightenment.

“With such refusal to accept defeat, it’s almost impossible not to associate this flower with unwavering faith.

“Although cultures have largely dubbed the lotus as a spiritual figurehead, it is most emblematic of the faith within ourselves.”

Meghan chose to wear the flower with a powerful meaning behind it for her first interview after stepping down as a senior royal last spring.

A source close to Harry and Meghan said the couple discussed their fraying relations with other royals in their Oprah tell-all.

Tensions remain particularly high between Harry and Prince William, 38, who were once notoriously close.

The two brothers have drifted apart in recent years and William was said to be “sad and shocked” over Harry’s behaviour.

Sources close to the second-in-line to the throne told the Sunday Times he thought Harry and Meghan had been “insulting and disrespectful” towards the Queen, 94.

After the palace announced the Sussexes would not be returning to royal life and were stripped of their royal patronages, the Sussexes put out a statement of their own saying they would continue to serve the organisations regardless of positions.

They said: “Service is universal.”

The duke and duchess’ decision to speak out in such a public way will worry aides at Buckingham Palace.

In the 30-second clip released in anticipation of the CBS special programme next week, Oprah can be seen quizzing the pair in an outdoor setting in California.

Harry told Oprah he felt “really relieved and happy” to be sitting next to his wife a year after the pair quit royal life.

He spoke of the “unbelievable tough” times he and Meghan have come through while Oprah also questioned Meghan on her royal role.

The trailer also includes a clip of Oprah telling the couple that they have said “some pretty shocking things here”.

The CBS programme will air on March 7 at 8pm Eastern Time.