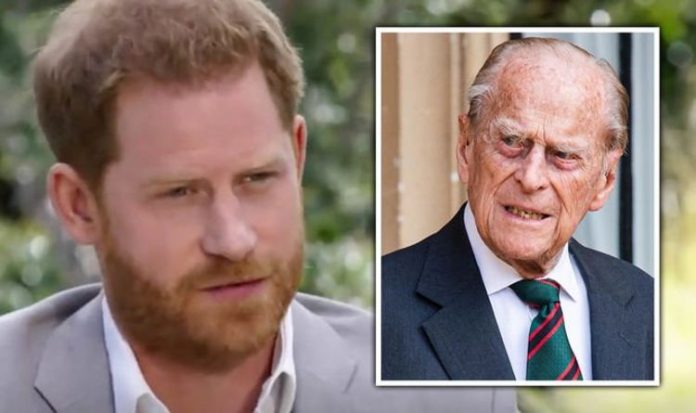 Prince Philip was yesterday transferred to St Bartholomew’s Hospital for further treatment and testing, the palace revealed, as he nears two full weeks in hospital. In the wake of this, royal aides have suggested the upcoming interview is not at the forefront of their mind.

One frustrated aide issued a swipe at the pair, telling the Daily Telegraph: “The family is very worried about him and their thoughts are very much with him rather than this Oprah interview.

“They have much more important things to worry about.”

Another senior aide said: “This programme is really not something we are focusing on at the moment.”

The Duke of Edinburgh was hospitalised at King Edward VII Hospital on February 16 after “feeling unwell”, as explained by Buckingham Palace on the following day.

At the time, royal sources stressed the Duke’s hospital admission was not an emergency one and had been advised by his doctor out of an “abundance of caution”.

Royal fans became increasingly concerned about Prince Philip’s health after Prince Charles made a 200-mile round trip from Gloucestershire to visit his father at a time when hospital visits are allowed only under exceptional circumstances.

Leaving the hospital some 30 minutes later, the Prince of Wales appeared upset.

However, royal watchers’ hopes were raised a few days later, when both Prince Edward and Prince William spoke about the Duke’s health conditions.

During his first face-to-face engagement of 2021, William said his grandfather was “ok” and doctors were “keeping an eye on him”.

Similarly, the Earl of Wessex told Sky News his father was “a lot better”.

He said: “As far as I’m aware, well I did speak to him the other day, so he’s a lot better thank you very much indeed, and he’s looking forward to getting out, which is the most positive thing.

The statement read: “The Duke of Edinburgh was today transferred from King Edward VII’s Hospital to St Bartholomew’s Hospital where doctors will continue to treat him for an infection, as well as undertake testing and observation for a pre-existing heart condition.”

Prince Philip received treatment for a blocked coronary artery in 2011, when he was rushed to Papworth Hospital after suffering chest pains.

Prince Philip’s current hospital stay is his longest-ever, followed by his hospitalisation in June 2013 when he was operated to his abdomen.

Yesterday, hours before Prince Philip was transferred to St Bartholomew’s Hospital, which specialises in heart conditions, US broadcaster CBS released two 30-second teasers giving a glimpse of what Meghan and Harry discussed with Oprah during their first sit-down TV interview since Megxit.

In one clip, Oprah can be heard asking Meghan “were you silent or silenced?”

The teaser, filled with dramatic cuts and music, also shows Oprah telling Meghan: “Almost unsurvivable sounds like there was a breaking point.”

The ads also show Prince Harry speaking about his mother Princess Diana while holding hands with his wife.

The two-hour-long special will air on March 7 at 8pm ET (March 8 at 1am GMT) and promises to bring to light more insights about the Royal Family, how the Duchess has coped with living under the spotlight and what brought the Sussexes to decide to step back as full-time working royals.

While the royals’ focus is said to be all on Philip, they continue to carry on their day-to-day duties.

During this video call, held last week, the monarch was being briefed on the area’s response to the COVID-19 emergency.

But she also joked about a statue dedicated to her, saying it could “possibly be quite alarming” for people spotting it out of the window.