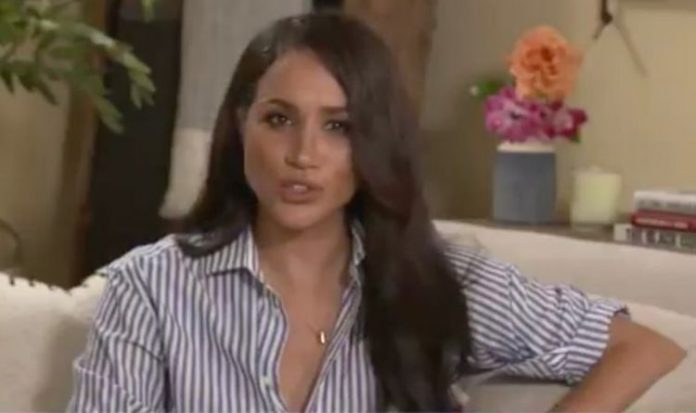 The Duchess of Sussex, 39, has been busy this month with a number of virtual appearances as she and Prince Harry, 36, carve careers in the US away from royal duties. And the former actress has opted for similar collared shirts in the videos.

Meghan wore a blue and white striped shirt with the top buttons undone and the sleeves rolled up as she spoke at the Fortune Most Powerful Women virtual summit on Tuesday.

The 39-year-old picked a light brown collared shirt as she made a surprise appearance on America’s Got Talent.

And Meghan chose a strikingly similar button-down shirt in dark brown when she and Harry took part in a Time 100 video earlier this month urging Americans to vote in the upcoming presidential election.

The former actress is clearly a fan of the stylish look.

When she stepped out with Harry for their first public outing at the Invictus Games in Toronto in 2017, Meghan wore a white button down shirt.

And the ex-Suits star included a similar crisp white shirt in her charity clothing collection for Smart Works last year.

The Sussexes announced bombshell plans to quit as senior royals in January.

They are now living in California with their one-year-old son Archie.

In July they moved into their new £11 million mansion in Santa Barbara.

They had previously been staying at a property owned by American actor Tyler Perry.

As they pursue personal and financial freedom, Harry and Meghan have signed a lucrative Netflix deal rumoured to be worth more than £100 million.

The deal meant Harry was able to pay back the £2.4 million of taxpayers’ money spent renovating their UK home Frogmore Cottage.

But almost half of Britons believe the Queen’s grandson and the ex-Suits star should be stripped of their royal titles, a recent YouGov poll suggested.

The survey of 3,250 adults found 48 percent of respondents believed they should lose their titles, 27 percent said they should not, and 25 percent did not know.