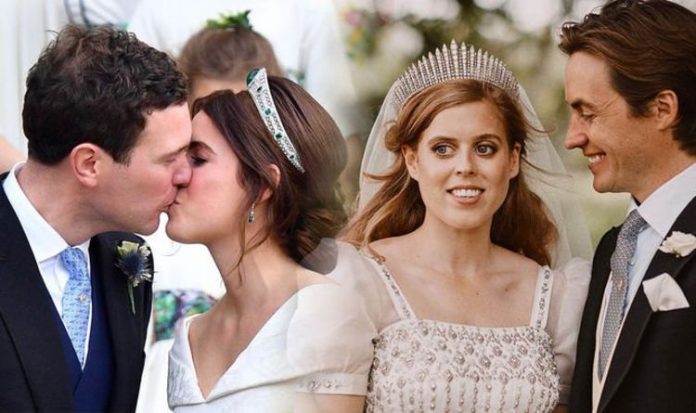 Princess Eugenie, 30, revealed she and husband Jack Brooksbank are expecting a baby last Friday. Eugenie, who is 10th in the line of succession, will give birth to the Queen’s ninth great-grandchild and Prince Andrew and Sarah Ferguson’s first biological grandchild. Eugenie’s older sister Princess Beatrice got married in July in the midst of the coronavirus pandemic. But how are the two princesses bonding in new ways now?

Princess Eugenie and Jack are due to celebrate their second wedding anniversary next month on October 12.

Eugenie shared two images of the couple, one where they are holding a pair of baby booties and another of their beaming faces.

As stepmother to Christopher Wolfe, known as Wolfie, she has been thrust into the world of school runs sooner than she might have planned.

This means that she is getting vital insight into motherhood before her pregnant younger sister.

According to reports, Beatrice has become a regular at Wolfie’s nursery, where she collects him and accompanies him as he rides his scooter home.

One onlooker who saw Beatrice and Wolfie together recently said: “Beatrice could have been any other mother on the school run.

“She welcomed the little boy out of school with a big hug and then took his bag while he set off on his scooter.

“It was quite touching how close they seemed. She clearly dotes on the little boy.”

With Beatrice getting so much practical on-hands experience of motherhood, she will likely grow even closer with her younger sister as she prepares for motherhood.

One friend of Beatrice said: “She has instigated a lot of that, rather than Dara.

“Bea has always been really close to Edo’s family, so it’s natural that Wolfie should become part of hers.

“He’s a super little boy and extremely cute. It will be interesting to see what happens when they start their own family – but Bea is so caring, his happiness will always be her number one priority.”

Beatrice is understood to be keen to start her own family, but she is likely enjoying her time as a stepmother to her adorable stepson.

Reports suggest it will only be a matter of time before the princesses start swapping baby notes as they both begin their own families.