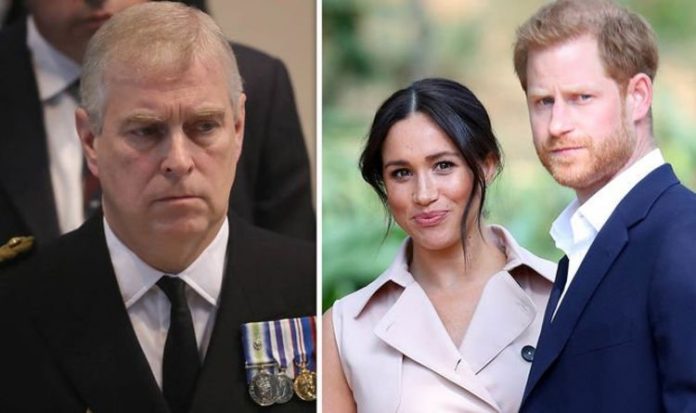 David Kurten, a member of the London Assembly, called for these three royals to be stripped of their titles in a scathing tweet. He wrote on the social media platform: “Prince Andrew, Harry and Meghan Markle should have their titles as Duke of York, and the Duke and Duchess of Sussex removed.

“The City of York and the County of Sussex deserve better.”

Elected in 2016 as a UKIP candidate, Mr Kurten announced in January 2020 he would run as independent next London Mayoral election – postponed to 2021 due to the coronavirus pandemic.

While he usually doesn’t delve into royal issues, Mr Kurten sparked a lively debate among his followers with this tweet.

One Twitter user, Kumanie Scarlett, wrote: “Why Meghan and Harry?

“I get Prince Andrew but am baffled by the hatred people have for them. What have they done wrong?”

Social media user Marie Grossmith replied: “Nobody said they hated them, but their hypocrisy is annoying.”

READ MORE: Prince Harry heartbreak: Duke opens up on his ‘number one priority’

Vanessa Gray replied: “He has massively embarrassed the Royal Family though”.

“We don’t need a Duke like Andrew, however people should vote to decide what to do with the Sussexes.”

Meghan and Harry officially stepped down as senior royals in late March, after having announced in January their intention of reshaping their work and role within the Royal Family,

The pair now live in California, but have retained their patronages and full titles and will continue to travel to the UK to represent their organisations and work at causes close to their hearts.

Prince Andrew continues to be a senior royal.

However, in mid-November last year he announced he would step back from public duties for the time being.

After the 45-minute interview entirely focused on his association with convicted sex offender Jeffrey Epstein, Prince Andrew was accused by several members of the public of failing to show sympathy towards the victims of the late financier.

Moreover, he was criticised for saying he did not regret his relationship with Epstein “as a whole” because it had opened up opportunities for him.

In the aftermath of the interview, the Duke saw many of the financial supporters to his projects as well as boards of his patronages announcing

a review of their relationship with him.

Since November, Prince Andrew has only been spotted in public a handful of time.

The Duke, who wholly denies any wrongdoings, spent Christmas at Sandringham with the Royal Family but didn’t attend the 11am service and the much-anticipated walkabout outside St Mary Magdalene church with other royals.

He was also spotted accompanying the Queen to a Sunday service in January and, weeks later, photographed leaving his home in Windsor with his car.