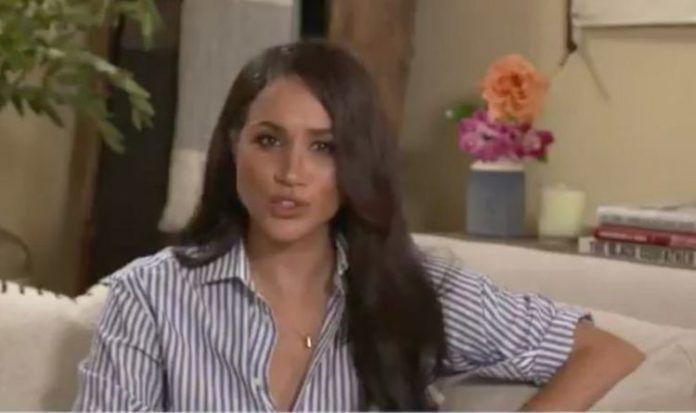 The Duchess of Sussex, 39, spoke at the Fortune Most Powerful Women virtual summit on Tuesday. In the background of the video, royal fans got a sneak peek inside her and Harry’s new family home after the pair started a new life in America away from royal duties.

Meghan was filmed sitting on a plush cream sofa as she took part in the virtual summit.

The walls behind are painted in a similar neutral shade.

In the video, a green indoor plant can also be seen to Meghan’s right, while orange and pink flowers sit to her left on a table.

A luxury candle stands next to the beautiful flowers, which are in a blue vase.

A stack of three books are also visible in the clip.

During the virtual summit, Meghan insisted her comments are often misinterpreted as “inflammatory” in what appeared to be a swipe at her critics.

Using a quote by American artist Georgia O’Keeffe to make her point, she said: “There are always going to be nay-sayers, but at the end of the day I used to have a quote up in my room many many moons ago, and it resonates now perhaps more than ever when you see all the vitriol and noise that can be out in the world.

“It’s by Georgia O’Keeffe – ‘I’ve already settled it for myself, so flattery and criticism go down the same drain and I am quite free.’

“And actually, some of it is reacting to things which just haven’t happened, which in some ways, I think you just have to have a sense of humour about it even though there is quite a lot of gravity, and there can be a lot of danger in misinterpretation of something that was never there to begin with.”

The ex-Suits star and the Queen’s grandson, 36, moved into their £11 million home in Santa Barbara in July with their one-year-old son Archie.

Alongside the 14,500-square-foot main home, there is a two-bedroom guesthouse on the seven-acre site.

After signing a lucrative deal with Netflix, the pair paid back the £2.4 million of taxpayers’ money used to renovate their UK property Frogmore Cottage.

The Sussexes announced bombshell plans to step back as senior royals in January.

The couple officially ended royal duties on March 31 and are now carving out careers in the US.

But almost half of Britons believe former actress Meghan and Harry should be stripped of their titles, a recent YouGov poll suggested.

The survey of 3,250 adults found 48 percent of respondents believed they should lose their titles, 27 percent said they should not, and 25 percent did not know.