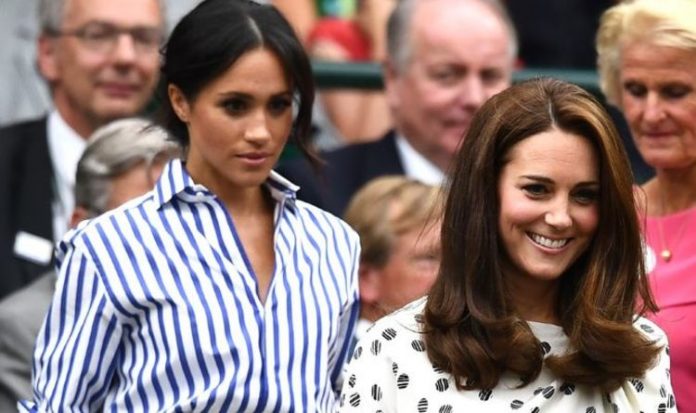 Meghan Markle has been told that she may have had “unrealistic expectations” about her relationship with Kate, Duchess of Cambridge. The sister-in-laws were said to have a “cordial, but distant rapport”, according to ‘Finding Freedom’, an unauthorised biography about the Sussexes’ time in the Royal Family. Channel 5 documentary, ‘Meghan & Harry: The New Revelations’, explored the claims made in the book.

Narrator Jennifer Saayeng told viewers: “It was reported that Meghan had wanted a strong and close relationship with her sister-in-law.

“The book details that Meghan had initially hoped that Kate would potentially reach out to her.

“She hoped the Duchess would help guide her as somebody who married into the institution.

“But the offer never materialised.”

She continued: “It goes on to say: ‘Kate felt they didn’t have much in common.

“‘Other than the fact that they lived at Kensington Palace’.”

Vanity Fair royal editor Katie Nicholl told Channel 5: “So while there might have been an expectation from Meghan that Kate was going to sit down and show her the ropes, perhaps that was an unrealistic expectation.

“The Duchess of Cambridge is a busy woman.”

The commentator continued: “In fact, it was probably one of the first times we’d seen Meghan out and about with baby Archie.

“But the real striking thing was that the two women were not speaking.

“They weren’t even conversing for most of the day.

“I think that was quite a bit of a realisation for the British public, and quite a disappointment as well that these two women were not going to be the best of friends.”