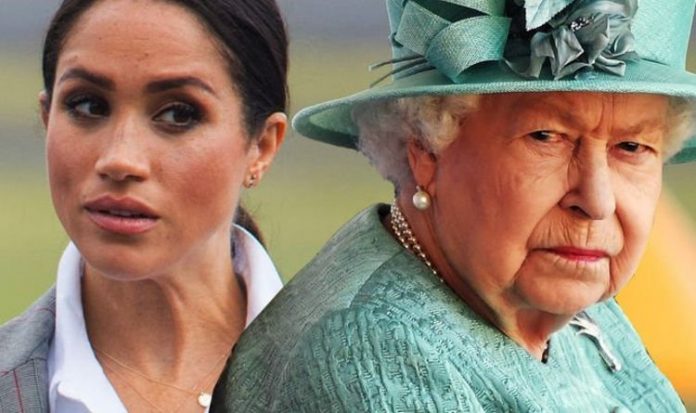 Meghan Markle and Harry: Expert on ‘anger’ over Oprah interview

Meghan and Harry sent shockwaves through the royal establishment over the weekend after they announced they would not return as working members of the Royal Family. The Queen shortly after confirmed the news, with Buckingham Palace, in a statement, noting that the pair “remain much-loved members of the family”. In a personal statement, the Duke and Duchess said they will continue to offer support to the organisations they have represented.

The final part of their statement has been hotly contended, after they noted “service is universal”.

While many claimed it showed that the pair believe everyone and anyone can serve their community, others saw it as a snub to the Queen and the Firm as vehicles of change.

It has been more than a year since the couple left the UK for North America, living first in Canada and then Los Angeles, where they have been since.

Earlier this month, the pair announced they were expecting their second child, much to the delight of royal fans around the world.

Prince Harry: The Duke has not visited his family in the UK for nearly a year (Image: GETTY)

Many note that the boy or girl will likely be brought up like their brother, Archie, in a life veiled in privacy.

Privacy was one of the main driving factors behind their 2020 move.

Yet, brief insights into how the pair struggled to cope with operating in the Firm have shone through in years past.

One struggle, highlighted by entertainment reporter Ashley Pearson, came in the form of Meghan’s tendency to “pick sides” in things like politics and public debate.

The former Hollywood actress was known for her philanthropic and humanitarian work even before meeting Harry, having worked with organisations such as World Vision and was an advocate for the United Nations (UN).

She was, and still is, also a vocal advocate for women’s rights.

However, a long-standing tradition within the Royal Family has seen members go without opinion for years.

This is especially salient given the Queen’s position as Head of State.

Thus, as Ms Pearson explained, when Meghan visited Ireland shortly after an abortion law had been defeated, the proud feminist inevitably slipped-up and broke the rule.

Speaking to the 2020 Amazon Prime documentary, ‘Meghan Markle: Changing Traditions’, she said: “Meghan Markle is not someone who just wants a pretty designer dress and a glass of champagne.

“She is actually engaged and interested in the politics and the storylines of where they’re going.

“In fact, she got in trouble not that long ago when she met someone in Ireland who was in Parliament, I believe, and congratulated them on the defeat of a bill that would have nullified abortion in Ireland, and said, ‘That’s great’.

“She ended up getting in trouble because the Irish politician tweeted, ‘Oh I had this great conversation with Meghan and she congratulated us on the defeat of this initiative.’

Royal tour: The pair pictured during their royal tour of Ireland (Image: GETTY)

“And everybody was like, ‘You can’t take a side Meghan, you can’t defend any position.’

“I think, in all honesty, one of the most difficult and challenging things in this whole experience for Meghan, is the royal tradition of not taking a side, of not showing your political leaning, of not having opinions.

“That is something that I think Meghan has already and will very much continue to struggle with.”

The visit saw Meghan attend a garden party at the British ambassador’s residence in Dublin.

Shortly after, then Irish Senator Catherine Noone tweeted that she had “had a chat” with the royal about the May referendum that approved scrapping Ireland’s abortion ban, and wrote: “She watched with interest and was pleased to see the result.”

She quickly looked to clarify that Meghan had not committed to an opinion in a later tweet, but failed in her attempt to do so.

This was made even more difficult after other attendees also tweeted about their chats with Meghan on the vote.

Una Mullally, a writer, tweeted a photo of her and Meghan, with the caption: “Great to chat with Meghan Markle, Duchess Of Sussex, about Repeal and the importance of her feminist activism. So important to have people in her position championing women’s rights. Total sounder!”

The Firm’s political neutrality stems from the 17th-century war King Charles I lost his head in the English Civil War.

In a bitter battle, the country was gripped between the Royalists and the Parliamentarians.

Airing political views has since been regarded as unfavourable to the monarchy’s image.

Although, there is no law against having political opinions.

Snippets of how the royals might be politically inclined have escaped Buckingham Palace over the years.

Former Prime Minister David Cameron was previously recorded as saying that the Queen had “purred” when he informed her of Scotland’s failed 2014 independence referendum.