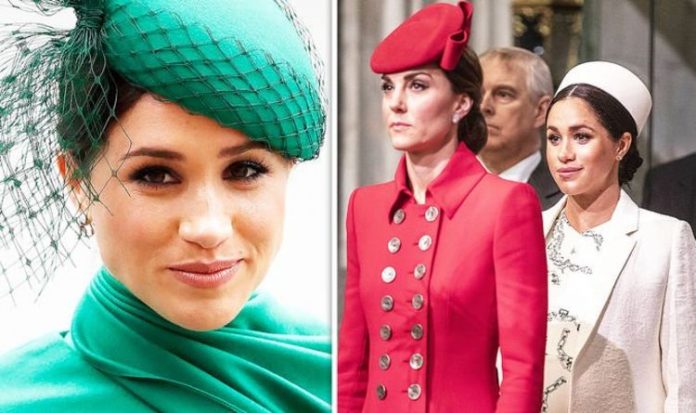 It’s been more than a year since Meghan Markle and Prince Harry made the decision to leave their senior roles within the Royal Family. The royal couple has since sought to make themselves financially independent by securing deals with Netflix and Spotify – and could make more money from public speaking in the future. Meghan and Harry came under fire after their decision to pursue new roles, which later led to them moving to California.

Prior to her relationship with Harry, Meghan found fame in her acting roles in the US.

She became a fan favourite in the legal drama Suits, which she starred in from 2011 until months before the royal wedding in 2018.

Meghan and Harry then performed duties for the Royal Family before their decision to leave their roles last year.

The Duchess, who gave birth to Archie Harrison Mountbatten-Windsor in 2019, was said to have struggled with royal life.

Many speculated about feuds between the US celebrity and the Royal Family – but nothing has been admitted by the couple.

Body language experts have since trailed through photographs of the royals in a bid to understand more about their relationships.

Traci Brown told Elite Daily that Meghan looked to Kate for help during her time as a working royal.

In 2018, she said: “[Meghan was] looking to Kate for direction – maybe [seeking] permission to laugh or behave a certain way?”

Ms Brown drew that conclusion from the regular glances Meghan made at Prince William’s wife.

Blanca Cobb felt that Meghan and Kate behaved like sisters – based on their mannerisms while they were together.

She said: “Meghan shows a sisterly bond with Kate in the ways their body language mirrors each other.”

In reference to one photograph, Ms Cobb said: “Notice the similar hand clasp on the lap as Meghan is looking at Kate.”

Another body language expert Lisa Mitchell commented that Meghan was not as confident “interacting” with the Royal Family, prior to marrying Harry.

Ms Mitchell said: “She’s more prone to have a ‘respectful distance’ between her and whoever she’s interacting with in the family.”

Ms Mitchell believed this was a sign that Meghan was “deferring to their position” and ensuring there was a “more formal feel to the exchange”.

After the pair married, the expert noticed Meghan’s mannerisms drastically changed and that she looked “much more engaged and self-assured”.

Ms Mitchell noted that Meghan had a “reserved demeanour” in her pre-marriage interactions.

She explained that recent photographs showed her acting in a “more animated” and confident way.

Ms Mitchell continued: “More gestures, covering her mouth a bit as she laughs and a genuine smile on her face during the encounters.”

Ms Brown also countered claims that the relationship between Meghan and the Queen was not good by pointing out their gleeful expressions whenever they were together.

She said: “Now that she’s been with the queen alone on an outing, we see that they have a caring connection.”

Away from the body language analysis, the royal made her opinions clear after reports emerged about her name being removed from Archie’s birth certificate.

Meghan’s representatives responded to claims that it had been deliberately changed by her.

It followed Lady Colin Campbell telling that her first two names – Rachel Meghan – were removed from the 2019 document in the section for the mother.

The document now reads “Her Royal Highness The Duchess of Sussex”.

Last weekend, Lady Colin Campbell told the newspaper: “It is extraordinary and raises all kinds of questions about what the Sussexes were thinking.”

Prince Harry’s name was also changed on the document as it previously didn’t state “Prince” before his name.

Meghan’s representatives said it was “offensive” to suggest that she chose to remove her names from her son’s birth certificate.

She confirmed that the name change was “dictated by The Palace” not by her nor Harry.

On Sunday, Buckingham Palace sources told The Telegraph that the change was due to a “clerical error and nothing more than that”.