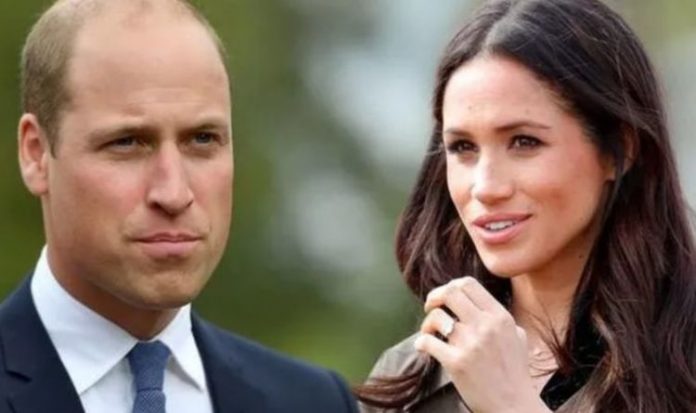 Meghan Markle admitted to feeling the pressure of public scrutiny being a member of the Royal Family weighing heavy on her a few months before she announced plans to quit her working royal career. But despite the new path the Duchess of Sussex chose to take with husband Prince Harry, a royal source claimed Meghan had shown her ability to adapt to royal traditions during a very special “audition”. Speaking to People, they said: “Although Meghan was a trained actress, this was an audition like no other, and she wanted to impress her future royal relatives.

“To that end, Meghan’s biggest challenge was finding the perfect novelty gifts to amuse her new extended family.

“At least one of her gifts was a huge hit. A spoon for William that had ‘cereal killer’ embossed on the shallow bowl end of the utensil.”

Meghan may as well have asked for tips to win over the Royal Family from Prince Harry, who is reported to have an impressive ability to amuse the Queen with his special Christmas presents.

The Duke of Sussex was once reported to have had Her Majesty in stitches because of a rather naughty shower cap while celebrating with the other royals at Sandringham.

Royal authors Omid Scobie and Carolyn Durand wrote in their book ‘Finding Freedom’: “One year Harry reportedly gave the Queen a shower cap emblazoned with the phrase, ‘Ain’t life a *****’ which she loved.

“Another time he gave his grandmother a Big Mouth Billy Bass singing toy, that was said to sit proudly in Balmoral, her Scottish retreat, and provide the Queen with great laughs.”

The Queen is known to loathe serious Christmas presents and has been following a tradition passed on since Queen Victoris which has Royal Family members exchange gag gifts to mark the holidays.

Kate, the Duchess of Cambridge was reported to have presented Her Majesty with a jar of homemade chutney during her first royal Christmas in 2011.

Her Majesty and Prince Philip will remain together at Windsor Castle, where they have been shielding on-and-off since March.

Meghan Markle and Prince Harry will celebrate their second Christmas away from the Royal Family, the first in their new home in Montecito, California.

Prince William and Kate, the Duchess of Cambridge whisked off their three children, George, Charlotte and Louis, to their Norfolk country pile, Anmer Hall.

Prince Edward and Sophie, the Countess of Wessex had been expected to join the Queen and the Duke of Edinburgh but new rules to limit the spread of the virus have forced the family to shelve the plans.